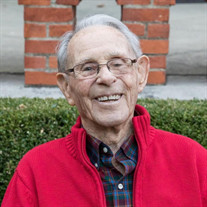 Samuel William Burnley Jr. Samuel Wm. Burnley Jr., 101 ¾, was born in Detroit, Michigan on February 24, 1919 to the late Louise and Samuel Wm. Burnley Sr.. He passed peacefully away on November 5, 2020. Sam Jr. was the oldest of four children. His youngest sibling, Mary Louise Helton survives him, and brothers Thomas and Archibald are deceased. Sam spent his young years in Redford, Michigan and attended Redford Union High School. He was drafted into the Army in 1941 and served until 1945, serving in Australia, New Guinea and the Philippines. He always shared that his draft number was “911”, ironic for a soldier that saw combat duty. Sam began to help his family financially by delivering newspapers at the tender age of 8; he later supported his family by working in a grocery store in high school, and then learning to be a butcher/store manager for Kroger Company before WWII. After WWII, he became a draftsman and concluded his work career as an interior store designer. Sam met his beloved wife, Janette Sackett and they were married on October 14, 1941 and were blessed to be married 69 years before Janette’s death. They lovingly raised their four daughters: (deceased) Sharron Granlund (Neil), Jo Ann Rosol (Richard, deceased), Marie Smith (Charles), and Debra Doherty (R. Jerry). He was a grandfather to Jason Granlund, Chad (Kathleen) Granlund, Kara (Adam) Anderson, Theresa McCleese-Bourdeau, Tina Gorkhali (deceased), Elizabeth Smith (deceased), C. Denman (Alisha) Smith, Rachel (Damian) Gonzalez, Rita Doherty, John Doherty and Jake Doherty. He was also the great-grandfather of 11. Sam and Janette raised their family in Orchard Lake, MI; Muskegon, MI; and Columbus, OH. After retiring, Sam and Janette lived in Florida for 22 years before returning to Gahanna, Ohio. Sam was an avid and talented golfer winning the Ohio Seniors Championship twice. Throughout his life, Sam was active in various churches including St. Luke Lutheran Church. He also gave his time to Habitat for Humanity, various PTAs, was a Shriner in the Masonic Order for more than 70 years, he was a church deacon, volunteer fireman, and did missionary work. Sam and Janette’s travels took them to Europe, Africa, Australia, South America and throughout the Caribbean and United States. The family would like to thank the Administration, staff, and residents of Three Creeks Senior Living for their help, kindness, and caring attitude during the past three years. A very special thank you to Sam’s neighbor, Jill Gale, for her friendship and help during the past 9 months. We would also like to thank Taylor Howell, Capital City Hospice (Angie, Bob, Penny, Chaplain Craig and Denise, to name a few) and HomeWell Care Services. A memorial service will be held at a later date. In lieu of flowers, a contribution could be made to St. Luke Lutheran Church (4456 Morse Road, Columbus, Ohio 43230). Sam will be greatly missed by his daughters, family and friends; but always remember that Sam-I-Am was A-OK until the very end!

The family of Samuel Burnley created this Life Tributes page to make it easy to share your memories.

Send flowers to the Burnley family.