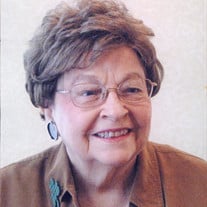 Rosemary (Click) Belt Rosemary Belt, 94 entered eternal life on Monday, December 28, 2020 at Riverside Methodist Hospital in Columbus, Ohio. Rosemary was born on March 16, 1926 in Clark County, Springfield, Ohio. She was the daughter and youngest child of Orva and Grace (Umpleby) Click. She is preceded in death by her husband, Vernon Clymer Belt, parents, sister, Donna Schaffner and brothers, Richard, William and Lynn Click. Rosemary was raised in Springfield, Ohio. She is survived by nieces Anne and Bill Clark of Morganville Kansas, Linda and Bob Shaw of Juneau, Alaska, Beverly and Edgar Shaw of Crossville, Tennessee, Marty and Wayne Swift of Gahanna, Ohio and Barbara and John Burkholder of Dublin, Ohio. Nephews, Dennis Click, Springfield, Ohio, Jim Click, Ormond Beach, Florida, and David and Judy Schaffner of St. Charles, Missouri. Rosemary graduated from Springfield High School in 1944 with comedian, Jonathan Winters. In 1944, Rosemary moved to Columbus at the urging of her older sister, Donna, who encouraged Rosemary to attend OSU. She enrolled at OSU. She fell in love with the City of Columbus and remained here the rest of her life. She worked for the CIA in counter-intelligence while in college to pay for college and personal expenses. She graduated from The Ohio State University with a Bachelor of Science in Education degree in 1958. She was an elementary school teacher in the Worthington School District for 5 years and spent 15 years with the Upper Arlington School District teaching 5th grade at Burbank and Tremont Elementary Schools. From 1964-65, Rosemary taught for the US Army in Gelnhausen, Germany. While teaching in Germany, she enjoyed traveling throughout Europe. Rosemary traveled to the Holy Land and other parts of the world. She mentioned her travels as one of the most exciting experiences in her life. After retirement, she subbed for 2 years in the Upper Arlington School District. Rosemary married Vernon Clymer Belt in 1970 at First Community Church. They were married for 23 years. After Vernon passed, Rosemary fulfilled a lifelong dream of becoming an ordained pastor. She graduated from Trinity Lutheran Seminary with a Masters in Theology with an emphasis in pastoral care. She became a Chaplain at Friendship Village of Dublin, along with Riverside and University Hospitals in the Cancer unit. She became a commissioned Minister in 2007 at the United Church of Christ. She lived at Friendship Village of Dublin for 18 glorious years. She served as Co-Chair of the Vespers Committee with Rev. Fred Ketner, Rev. Dan Shipley and Rev. Ken Dillman. She shared special friendships with Margie Ketner, Rev. Ken Dillman, Rev. Jim Long at First Community Church, Dr. Richard Bowen, DDS and beloved former student Lori Valley. Rosemary dedicated her later life to the work and ministry of her Lord. Her two favorite poems were "Grace" by Maya Angelou and Mother Teresa's Poem. "You see, in the final analysis it is between you and God; it was never between you and them anyway." A special "Thank You" to the Administration and Staff at Friendship Village of Dublin for providing 18 wonderful, full years of love, friendship, fellowship and community! Rosemary loved animals, especially dogs. Memorials can be made in her honor to: Franklin County Dog Shelter at www.franklincountydogs.com, and Adoption Center or Ohio SPCA.

The family of Rosemary C. Belt created this Life Tributes page to make it easy to share your memories.

Send flowers to the Belt family.