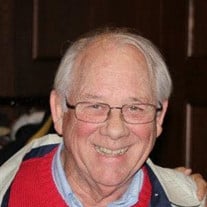 Rondel B. Brewster (Ron) passed away on Tuesday, November 10, 2020 with his daughters by his bedside. Ron was born on November 27, 1941 to the late Robert Grant and Ruby (Hankins) Brewster. He grew up on his beloved farm in Centerburg, Ohio where he learned all about hard work and acquired his strong work ethic. Ron graduated from Sparta High School in 1959, then went on to get his Bachelor's Degree in Education from Ohio University in 1964. He landed his first teaching job at Kenton Junior High in Kenton, Ohio and it was during this time in Kenton that he and his late wife Brooke, had their first child Heather Renee. They moved to Columbus in 1968 when he took a teaching job at Upper Arlington High School where he taught American History, Economics and Psychology and later became the Director of the School's Driver's Education program. His family grew in 1969 with the birth of his second daughter Jennifer Brooke and again in 1971 with the birth of his third daughter Melissa Ann. He obtained his Master's Degree in Guidance and Counseling from Ball State University in 1973. Throughout the years Ron developed a few hobbies including a love for flying and all things aviation in the early 1980s. He got his private pilot's license and flew for the next 20+ years. He and Brooke were avid Charles Lindbergh collectors and traveled throughout the U.S. to different Lindbergh conferences where they built their extensive collection. He was a member of EAA and he and Brooke attended the EAA AirVenture event in OshKosh, WI for many years. He created many wonderful memories for his family with annual, week-long summer camping trips to Mohican State Park with an amazing group of friends made during the time the family lived in Clintonville, some who are still close friends today. He also enjoyed taking his family on summer vacations to his Aunt's place in Myrtle Beach. He was known for capturing all of our life memories with lots of photos and home videos. After retiring from teaching in 1997 Ron picked up the game of golf and played in several leagues over the years. Then, for about a year before he moved into assisted living in 2019, he carried out his love for history by volunteering every Thursday at Mott's Military Museum. Ron was a devoted husband and father and always provided for his family. He had a gentle, compassionate soul and touched so many lives. Everyone that knew him enjoyed his quick wit and puns that sometimes made sense and sometimes didn't make sense such as "You can't dance and it's too wet to plow" or "But on the other hand…she wore a glove." Or when someone would ask him what time it was he would say "you mean now?" And our favorite was, when anyone told him he looked handsome he would say "I'm just pretending." He also loved country music and blue grass music and always said "I liked country before country wasn't cool." Ron loved and adored his 11 grandchildren and was their biggest supporter by attending as many of their sporting, choral and school events as he could. He was also a huge Ohio State Buckeyes fan and he and Brooke got to attend the 1997 Rose Bowl when OSU defeated Arizona State with a last-minute touchdown drive. He was a member of Upper Arlington Lutheran Church and was active in a men's Bible Study group. He accepted Christ into his life and was baptized in on May 1, 2010 by Brooke's bedside just three days before she passed away. Ron suffered from Dementia and in February of this year he was diagnosed with Progressive Supranuclear Palsy. Four days before he passed, he got a positive test result for COVID-19. He is preceded in death by his loving and devoted wife of 46 years, Brooke; daughter Jennifer; parents Grant and Ruby Brewster. Ron is survived by his daughters Heather (Matt) Schaller of Lebanon, IN and Melissa (Kirby) Howard of Delaware, OH; his 11 Grandchildren: Mason (Maddy) Schaller, Reid Schaller, Laura (Luke) Smith, Isabelle, Morgan II, Eleanor, Benjamin, Ruby Kate and Josiah Gierman; Keaton and Emmy Howard. He is also survived by his two sisters, Sadie DeWeese and Kathy (Ron) Peters, his best, 4-legged buddy Boomerang, many cousins, nieces, nephews and friends. The family would like to thank Dee Morgan, his private care giver for the last year, for caring for him as if he were her own Dad, First and Main of Lewis Center for the loving care he received during his 11 months there, and Capital City Hospice for the amazing and gentle end of life care he received. In lieu of flowers the family asks for donations to be made in Ron's memory to Capital City Hospice, 2800 Corporate Exchange Dr. #170, Columbus, OH 43231; First and Main of Lewis Center's "Thirsty Thursday" fund, 8875 Green Meadows Drive, Lewis Center, OH 43035 (write "In Memory of Ron Brewster" on the memo line of your check), and/or Motts Military Museum, 5075 S Hamilton Rd, Groveport, OH 43125. Due to the Current COVID-19 situation the family has decided to cancel the public visitation origionally planned for this weekend. A celebration of life will be held at a later time.

Rondel B. Brewster (Ron) passed away on Tuesday, November 10, 2020 with his daughters by his bedside. Ron was born on November 27, 1941 to the late Robert Grant and Ruby (Hankins) Brewster. He grew up on his beloved farm in Centerburg, Ohio... View Obituary & Service Information

The family of Rondel Brewster created this Life Tributes page to make it easy to share your memories.

Rondel B. Brewster (Ron) passed away on Tuesday, November 10,...

Send flowers to the Brewster family.