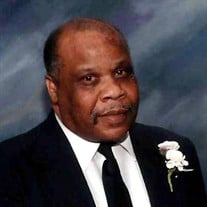 Our beloved Ronald Eugene Hammond age 84, was peacefully called home to be with the Lord on Monday, May 4, 2020. Ronnie as he was known was born April 7, 1936 in Springfield Ohio to the late William Hammond and Gladys Rice Hammond. He was a graduate of Springfield High School, a veteran of the United States Army and retired from First Energy Corporation. In December 1956, Ronnie married his childhood sweetheart Barbara Ann Oliver to that union four sons were born. Ronnie enjoyed camping, fishing and working around the house. Ronnie and Ann loved to travel, especially to Las Vegas and always enjoyed spending time together and with the grandchildren. For the last several years, he resided in Columbus Ohio close to family and continued to travel on occasion and shared memories with friends at The First and Main Assisted Living Facility in Lewis Center, Ohio. Ronnie was preceded in death by his loving wife Ann of 42 years, sisters, D'Esta Smith; Frances (Geraldine) Rogers; brothers, Virgil; Richard; William and Reginald (Reggie) Hammond. He leaves to cherish his memories four sons, Michael of Cleveland OH; Alan (Rebecca) of Columbus OH, Gregory (Karen) of Bedford Heights OH; and Ronald Eric (Yulanda) of Pickerington OH, eleven grandchildren; Octavia, Michael Jr., Darius, Darial Winston; Naomi, Timothy; Cory, Eriq, Tia; Ronald and Robert, and two great-grandchildren, Leander and Orion. Four sisters, Shirley Hammond of Erie PA, Gladys (Bubbles) Oliver of Dayton Ohio, Delores McCoy of Virginia and Rose Marie May of Springfield Ohio and one brother Kenneth Hammond of Urbana OH, sister-n-laws, Christine (William) Wiley of Richton Park, IL, and Gloria Oliver of Springfield OH; and a host of nieces and nephews, great nieces and nephews; cousins and a close friend of the family Daria Hammond. There will be a private service to honor Ronald with burial to follow at Rose Hill Cemetery, Springfield, Ohio with Military Honors. The family would like to give a special thanks to the management and care team at First and Main Assisted Living of Lewis Center, Ohio where he resided the last two years and to Capital City Hospice (Shonte, Personal Aid; Jamie, RN and Melissa, LPN) for their exceptional care and assistance at his home from mid-April until his death.

Our beloved Ronald Eugene Hammond age 84, was peacefully called home to be with the Lord on Monday, May 4, 2020. Ronnie as he was known was born April 7, 1936 in Springfield Ohio to the late William Hammond and Gladys Rice Hammond. He was a... View Obituary & Service Information

The family of Ronald Hammond created this Life Tributes page to make it easy to share your memories.

Send flowers to the Hammond family.