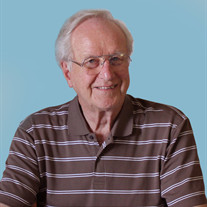 Ronald Andrew Evans, age 88, of Reynoldsburg, died Thursday, April 1, 2021. He was born March 14, 1933 in Pittsburgh, PA, the son of Andrew and Helen (Karch) Evans. He is survived by his wife of 64 years, June Breu Evans; daughters Gail Evans (Lee) Hervey and Margaret J. Evans; son, Gary R. Evans; grandsons, Nathaniel Hervey and Ryan Hervey; nieces and nephews and many friends. Besides his parents, Ron is preceded in death by a sister, Lillian Evans Gunther and infant daughter, Kathryn Marie Evans. Ron’s parents moved their family to Buffalo, New York in 1948. He attended Amherst Central High School, where he and June were classmates, Class of 1952. Following graduation, he joined the US. Air Force where he received training in communication systems at Scott AF Base, St. Louis followed by 1 ½ years in Okinawa. On his return, he and June were married Dec. 29, 1956, and they completed his enlistment at McGuire AF Base, Trenton, NJ before returning to the Buffalo area. Using his GI Bill, he graduated from Erie County Tech Institute. He was hired by the Federal Aviation Administration, and began his career, at Niagara Falls airport, then at Port Columbus Airport (Now John Glenn International) where he was a Radar Systems technician in the tower. Over the years, the FAA continuing education program required stays from 1-6 months at the training academy in Oklahoma City. Sometimes the family was able to go with him, experiencing life in “The West”. He and June, a Registered Nurse, bought a home and raised their children in the Reynoldsburg area. The family enjoyed camping and traveling in the USA. Ron’s interest in woodworking eventually resulted in converting the garage to a carpenter’s shop where he created many beautiful pieces of furniture, home remodeling projects and a collection of small detailed wooden vehicles. On every piece that left his shop, whether a full -sized desk or a miniature fire truck, he left his trademark, a hidden penny with the date of the year it was made. In 1989, after 32 years, he retired from the FAA and for several years he was active in the FAA Columbus Tower Retirees group. All are welcome to attend the Memorial Service held at 5:00 pm Friday, April 16, 2021 at SCHOEDINGER EAST, 5360 E. Livingston Ave., Columbus, OH 43232 where family will receive friends until 7:30 pm Friday. Interment at Forest Lawn Memorial Gardens at a later date. In lieu of flowers, contributions may be made to Columbus Humane, 3015 Scioto Darby Executive Court, Hilliard, OH 43026, in Ron’s memory. Please visit www.schoedinger.com to share a memory or send condolences to Ron’s family.

The family of Ronald Evans created this Life Tributes page to make it easy to share your memories.

Send flowers to the Evans family.