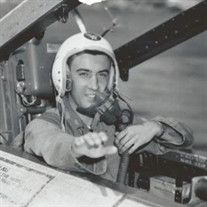 Lt. Colonel Ronald James Benedict USAF (ret), 88, of Blacklick, Ohio, passed away surrounded by his family on February 5, 2021. Ron was born October 1, 1932 in Sharon, Pennsylvania, to the late Herman and Anna Benedict. Ron was also preceded in death by his beloved wife, Frances Benedict, of 65 years, his sister Kathleen Benedict and his brother Robert Benedict. Ron graduated from Penn State University where he studied electrical engineering and Air Force ROTC. He met the love of his life, Fran, there. Upon graduating, Ron was commissioned into the US Air Force and proudly served his country for over 23 years, doing a one-year hardship tour in Korea and a combat tour in Vietnam where he received two Distinguished Flying Crosses. He was highly decorated during his career receiving numerous other commendations, including 9 air medals. After retiring from the Air Force, Ron had a second career beginning at Mount Carmel East Hospital as the Director of Plants and Maintenance, eventually overseeing all construction projects for the Mount Carmel Hospital system. Ron was a devoted husband and father. He enjoyed spending time with Fran, his children and extended family. Ron had a passion for his boat, the Pathfinder, which was docked on Lake Erie. On his boat, Ron and his wife enjoyed fishing, entertaining family, and exploring the islands near Port Clinton. He enjoyed photography and always had his camera with him to capture the special times. Ron loved traveling and enjoyed family vacations in the United States. His military career provided world-wide travel opportunities. He often remarked that a highlight was seeing the beauty of the Acropolis at night. Ron is lovingly survived by children Barb (Keith) Brown, Cindy (Chuck) Darling, Karen (Jeff) Chrobak, Tammy (Tom) Thompson and David (Robin Modeszto) Benedict; grandchildren Brandon Chrobak, Steven (Sarah) Chrobak, Austin Chrobak, Katie Benedict and Cole Benedict; and also extended family and friends. Visitation will be held for Ronald on Thursday, February 11, 2021 at SCHOEDINGER NORTHEAST FUNERAL HOME, 1051 E. Johnstown Rd., Gahanna, from 10am to 12pm. A Funeral Service will immediately follow at 12pm, Mark Dettmer to officiate. Interment at Forest Lawn Memorials Gardens. Masks will be required and social distancing observed.

The family of Ronald Benedict created this Life Tributes page to make it easy to share your memories.

Send flowers to the Benedict family.