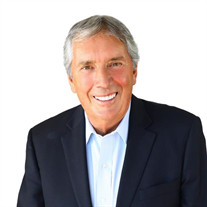 Ron Andrew Joseph Cadieux, passed away suddenly on November 5, 2021 at the age of 73 with his wife Sandy by his side. Born on April 29, 1948 in Winnipeg, Manitoba, Canada to Annette and Thomas Cadieux, he was raised in Vancouver and Montreal. Ron received degrees from Loyola University of Montreal, McGill University (Masters) and Michigan State University (PhD), while receiving the education of a lifetime traveling around the world and exploring more than 70 countries. Ron's unwavering passion for uplifting others was highlighted through his time working with Mother Theresa, Cambodian refugee camps, L'Arche Community for Intellectual Disabilities, and being on the board of several non-profits around the Columbus community and the world, including the New Albany Symphony, Respire Haiti, the Columbus Coalition Against Family Violence, and Salvation Army of Columbus. In his corporate life, Ron was essential in developing the leadership development and on-boarding programs at Ohio Health, Ashland Chemicals, Victoria's Secret, Coca-Cola, and L Brands before joining his wife, Sandy, in real estate at The Raines Group in 2001. As Principal of The Raines Group, Ron personally helped hundreds of families in the Columbus area find a place to call home - and his clients always became part of the family. He was a senior leader with Tony Robbins, loving the upbeat energy and personal transformations he saw. Ron had a love for movies (even though he fell asleep in half of them) and skiing, marrying his love of both by attending the Sundance Film Festival every year. Ron had an insatiable curiosity for learning about each person he met, from every Uber driver to corporate executives. Recently, throughout the pandemic, Ron FaceTimed his 98-year-old mother, Annette, in Montreal every week. Ron touched the lives of everyone he encountered with his gentle way, generous heart and ability to encourage and put people at ease. Ron is survived by his wife Sandy Raines, son Nathan Rideout-Cadieux, daughter Laura Raines, mother Annette Cadieux, brother Richard Cadieux, sister Lynne-Marie Cadieux (Khanh), brother-in-law Rick Raines (Andrea), nieces Sarah, Rachel, Rebecca and Amanda Picard, Kalina Nation, nephews Creed Sewell, Britton and Cording Raines, and countless friends and relatives. He is preceded in death by his father Thomas Cadieux and faithful dog Webster. The recording of Ron's memorial service can be found at https://www.youtube.com/watch?v=nrQA8vP-qq0. If you would like to continue to honor Ron’s memory, we ask that you direct donations to the Ron Cadieux Memorial Fund at the New Albany Foundation benefiting Arts and Education, found here: https://columbusfoundation.org/the-giving-store/fund-directory-listing/NewAlbanyCommunityFoundation-RonCadieuxMemorialFund/4334

Ron Andrew Joseph Cadieux, passed away suddenly on November 5, 2021 at the age of 73 with his wife Sandy by his side. Born on April 29, 1948 in Winnipeg, Manitoba, Canada to Annette and Thomas Cadieux, he was raised in Vancouver and Montreal.... View Obituary & Service Information

The family of Ron Cadieux created this Life Tributes page to make it easy to share your memories.