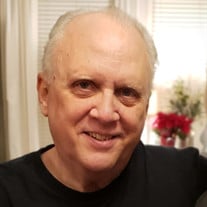 Watch webcast for Roger Eugene Pence: https://webcasts.lifetributes.com/1140108 Roger Eugene Pence, 73, of Columbus, Ohio passed away May 20, 2021 following his battle with cancer. Roger was born on August 30, 1947 in Columbus, Ohio to the late Norman W. Pence Sr. and Phyllis (Leppert) Pence. Roger graduated from Brookhaven High School in 1965, where he met and later married his high school sweetheart, Beverley. Roger is a graduate of Franklin University. Roger worked at Liebert Corporation for fourteen years, where he managed their computer department. He was self-employed as a computer consultant until his retirement in 2007. Roger played in a rock and roll band, The Epics, with his brother Bill in the 1960's. Later in life, he continued to play bass guitar, guitar, and drums. Roger enjoyed all genres of music. He was an avid reader, tv and movie buff, skilled card player, and he was a master at woodworking and remodeling projects. Roger loved aviation and space. He enjoyed building and flying his radio-controlled airplanes and fulfilled a lifelong dream the day he flew a propeller airplane. Roger was a long-time member of Xenos Christian Fellowship/Dwell Community Church. He loved the Lord, he loved God's Word, and he loved his brothers and sisters in Christ. Roger enjoyed living life surrounded by his cherished wife, children, grandchildren, family, and friends. Roger is survived by his beloved wife of 52 years, Beverley (Barone) Pence; daughter Natalie (Clifford) Rich; son Brian (Jennifer) Pence; son Bradley (Lisa) Pence; daughter Shelley (Gary) Ware; his ten grandchildren; Olivia Rich; Madeline, Sophia, and Owen Pence; Jason, Samuel, and Ella Pence; and Abigail, Cade, and Charlotte Ware; brother Norman "Bill" (Tracy) Pence Jr; sister Elaine Pence; sister-in-law Phyllis (Tom) Nicely; brother-in-law Craig Barone; sister-in-law Lyn (Mike) Dobyns; brother-in-law Gary Barone; and many nieces and nephews. Arrangements entrusted to SCHOEDINGER DUBLIN where a visitation will be held on Friday, June 4, 2021 from 4-7pm. Roger's Celebration of Life Service will also be held at SCHOEDINGER DUBLIN on Saturday, June 5, 2021 at 11am after one hour of visiting time from 10-11am. A reception with light refreshments will follow the Celebration of Life. With current CDC guidelines, masks are not required for fully vaccinated individuals inside the building. For those wishing to be present in spirit, a live webcast will be available on Roger's Schoedinger.com Tribute Wall shortly before the service begins. In lieu of flowers, the family would like donations to be made in Roger's memory to Dwell Community Church (to Humanitarian Aid Fund or Global Partnership Fund or Missions Fund or Urban Concern). Give Now OR Mail a check to Dwell Community Church, 1340 Community Park Dr, Columbus, Ohio 43229 (Please designate the Fund and in Roger's memory) The family has requested that you please click on the Memory Maker link below to leave a private video message for the family at .

The family of Roger Eugene Pence created this Life Tributes page to make it easy to share your memories.

Send flowers to the Pence family.