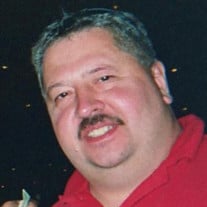 Roger Allan Kerekes, age 62, passed away peacefully surrounded by family and friends on Thursday, December 3, 2020. He was born in Canonsburg, PA August 31, 1958 to the late Elmer and Dorothy Kerekes. Roger was a 1976 graduate of Chartiers-Houston High School, moving to Columbus, Ohio in 1977, where he started his career with Worthington Cylinders. In his 43 years with Worthington, he served in many roles in the company up until his recent illness. He relocated to the Jefferson, Ohio plant in the early 90's, moving back in 1995 to assist in the opening of the Westerville, Ohio facility. He was a very versatile team member - serving over the years as a production group lead, supervisor, many welder roles, forklift operator, and injection molding operator, to name a few. Worthington was more than just a job for him - it was a family, and the relationships he developed there were very important and special to him. Roger always had a smile and a shoulder for his friends and family. He was man of few words, but actually said a lot without having to say much at all. His approachable nature and compassion for others made him a trusted friend to many. His Pittsburgh roots carried over to his love for the teams he grew up with - Steelers, Pitt, Penn State, Penguins and Pirates were his favorite teams, and he rooted for them passionately. He is survived by his brothers and sisters, Dave (Shelly) Kerekes, Mary (Gene) Jolley, Ron (Lauren) Kerekes, Shirl (Ron) Lyle, nieces and nephews Melissa Thomas, Craig (Sarah) Jolley, Terry Jolley, Tiffany Anderson, Brittany (Ty) Thomas, Anthony Lyle, and many, many cherished friends. Memorial contributions may be made in Roger's name to: American Cancer Society (https://donate3.cancer.org) Kobacker House (https://foundation.ohiohealth.com/programs/hospice-giving) A celebration of life will be held at a later date.

Roger Allan Kerekes, age 62, passed away peacefully surrounded by family and friends on Thursday, December 3, 2020. He was born in Canonsburg, PA August 31, 1958 to the late Elmer and Dorothy Kerekes. Roger was a 1976 graduate of Chartiers-Houston... View Obituary & Service Information

The family of Roger Kerekes created this Life Tributes page to make it easy to share your memories.