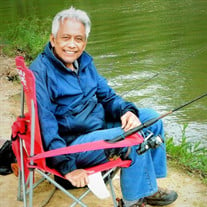 ROGELIO ("ROGER") TABINGA GADIANO October 6, 1939 to December 27, 2020 Rogelio ("Roger") Tabinga Gadiano, 81, of Columbus, Ohio passed away unexpectedly, Sunday, December 27, 2020. He was preceded in death by his first wife, Trinidad Foronda Gadiano; his son, Glen Frederick Gadiano; his parents, Moises and Norberta, and his brothers Rodolfo, Romeo, and Ramon. Roger is survived by his second wife, Maria Gadiano; his son, Willem Ferdinand Gadiano (Christina) and grandchildren, Alexandra (Scott Haraczy), Nathaniel, Christian and Megan; and great-grandson, James Victor Haraczy; his daughter-in-law, Sherri Gadiano (Glen Gadiano) and grandchildren, Gabrielle and Benjamin; his daughter, Virginia Faye Gadiano; and his younger siblings, Nellie and Ronilo ("Ronnie"). He was born October 6, 1939, in Manamoc, Cuyo, Palawan, Philippines. He attended Palawan High School and attended Mapua Institute of Technology (which is regarded by some to be the "MIT" of the South Pacific) before enlisting with the U.S. Navy. In the Navy, he attained the rank of Steward Second Class before being honorably discharged June 6, 1969. After the Navy, Roger was a computer analysts with the Home Beneficial Life Insurance Company until about 1995. Roger lived in Columbus, Ohio, since about 1986 where he did odd house fixing jobs for friends. His main occupation was caring for his wife, Trinidad, until her death in 2005. Roger remarried to Maria in 2006 until his death. He was a member of the Philippine American Society of Central Ohio, and the Philippine Seniors of Columbus. He attended St. James the Less Catholic Church. Roger was an avid fisherman who could be reliably found with one or two lines in the water at Alum Creek Reservoir or Lake Erie during warm summer months. He affected many people in positive ways with his jovial laugh and humor. He always was the "life" of any party he attended and was a good dancer and loyal drinking buddy. The Gadiano family and friends dearly love Roger and will always miss him even though they know he is safely home with the Lord. Mass of Christian Burial for family and friends: 10:30 a.m. Saturday, January 2, 2021, at St. James the Less Catholic Church, 1652 Oakland Park Avenue. SCHOEDINGER NORTH honored to serve the Gadiano family. In lieu of flowers, memorial donations may be made to the Roger Gadiano Fund (Fundraiser by Willem Gadiano : In Memory of Roger Gadiano (gofundme.com)) to assist with funeral and related expenses.

The family of Rogelio "Roger" Gadiano created this Life Tributes page to make it easy to share your memories.

Send flowers to the Gadiano family.