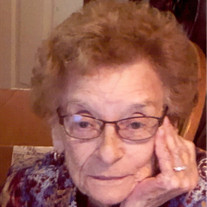 Roberta Belle (Cumbow) Smith, lovingly known as Bobbi, was born October 27,1935 to Robert and Garnet Stropes in Columbus, Ohio. She peacefully transitioned at the age of 86 to her heavenly home on November 8, 2021 surrounded by her loved ones. Bobbi had many careers in her lifetime, she worked diligently and found pleasure in each. Raising her children was her first career and she was very active in their schools PTA, taking the position of president. Bobbi served for over twenty years and retired as an executive at Abbington Communities. She took pride in making sure that the residents were well cared for and knew that they were loved. Bobbi was an artist at heart. She was an avid seamstress and made many special outfits for her children and grandchildren. You would walk into her home and see her either surrounded by pattern cut outs with measuring tape thrown over her shoulder as she was deep in work or she'd be curled up with a good book in her hand. Bobbi loved everything about Harry Potter and was waiting patiently for quidditch to become an everyday sport! If not at home, then you could find her shopping at Macys with family. Every Sunday was filled with laughter and jokes during Sunday dessert at G.G's house. Christmas vacations and trips to Disney were a must and she made sure to bring all her loved ones with her. Family was everything and Bobbi took pleasure in spending time with her children, grandchildren and great-grandchildren. She is survived by her children, Debbie (Rick) Ulery, Robert (Theresa) Cumbow, Joni (Tom) McCauley, Tom Cumbow and her son-in- laws Mike Vitullo and Roger Price; grandchildren: Heather (Demetrius) Clements, Deana (Joey) Miller, Tony Vitullo, Darrell (Ally) Cumbow, Natalie Everitt, Halley Vitullo, Nici McCauley, Nathan McCauley, Britany (Tom) Williams and Bailey Cumbow; her great-grandchildren Nyllah Clements, Carlee, Corbin and Cydney Miller, Colton Jennings and Presley Cumbow, Olivia, Owen and Piper Everitt, Adelyn Yarvitz; Taylor McCauley, and Lawson and Maverick Williams. She is preceded in death by her parents Robert and Garnet Stropes, beloved husband Bill Cumbow, daughters Shelley Vitullo and Marsha Price, and brother and sister-in-law Jack and Betty Stropes. We will be saying farewell to our loving Mother, Grandmother, Great- Grandmother (G.G), and friend on Tuesday, November 23, 2021- visitation begins at 10:00 am with service at 11:00 am at Schoedinger Northeast 1051 E. Johnstown Rd. Gahanna, OH 43230. Pastor Jim Condrey will officiate the service. Bobbi never met an animal she didn't like and because of that, please make contributions in lieu of flowers to your local Humane Society. The family will forever be grateful for the care of Fairhope Hospice and many others during Bobbi's last days.

Roberta Belle (Cumbow) Smith, lovingly known as Bobbi, was born October 27,1935 to Robert and Garnet Stropes in Columbus, Ohio. She peacefully transitioned at the age of 86 to her heavenly home on November 8, 2021 surrounded by her loved ones.... View Obituary & Service Information

The family of Roberta "Bobbi" (Cumbow) Smith created this Life Tributes page to make it easy to share your memories.