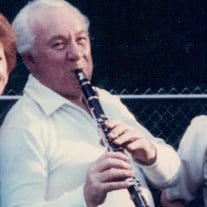 Robert Burns Wheeler Jr, 100, a longtime resident of Cincinnati passed away at his home in Columbus on Friday March 5, 2021. He was the beloved husband of the late Virginia (Henderson) Wheeler with whom he shared 65 years of marriage until her passing in 2016. Born in Somerset, Kentucky on July 2, 1920, he graduated from high school in Birmingham, Alabama in 1937. He obtained his BS in Music Education at the University of Cincinnati in 1941. After performing on the road with various bands he enlisted in the Navy via band audition at Naval Base San Diego as Musician First Class in April of 1942. Upon the recommissioning of the USS West Virginia, he shipped out to the Pacific theater of WWII and witnessed the battle and taking of Mount Suribachi, Iwo Jima. He also played his clarinet in the Navy band on the USS Missouri on September 2, 1945 for the signing of the Japanese Instrument of Surrender. Bob returned to San Diego, Richmond, VA and NYC and civilian life at the end of the war then continued to travel with big bands all over North America. He eventually returned to Cincinnati to attend the Cincinnati Conservatory of Music where he completed his Master of Music degree for flute performance in 1950. He also met Virginia Claire Henderson in early 1950 while playing at the Lookout House in Covington, KY. They married that November and settled in Cincinnati where they built a family of three daughters in Finneytown. Mr. Wheeler was the high school band director at Central High School and Wyoming High School/Middle School. He taught many young, aspiring musicians the discipline and beauty of music performance both in school and through private lessons. He was also very passionate about teaching the appreciation of music's contributions to humanity and history. Over the years Bob continued to play his clarinet, flute and saxophone in and around Cincinnati at many venues. He played the Beverly Hills Supper club, dances at Moonlite Gardens and summer park concerts with Smitty's Band, traveling circuses and ice shows, weddings and family celebrations and many other events. Grandpa and Grandma loved out of town visits with their young grandchildren who have been a great source of love and pride as they have grown into young adulthood. Bob made a new life for himself in Columbus, Ohio in 2015 when he and Virginia moved north to live near daughters Robin and Carol. He made many new friends and memories at First Community Village over the past 6 years. He performed clarinet serenades for many residents in the dining room and inside the facility and he was well loved by staff and friends alike. Bob was playing old songs from memory on his clarinet until just a few days before his passing. Bob was the dear and loving father of Ellen Hargrave and her husband Robert of North Fort Meyers, FL, Robin Conway and her husband Daniel of Columbus, OH and Carol Wheeler and her fiancé Mark Noltimier also of Columbus, OH; He was beloved by his 6 grandchildren James Hargrave (Daphne), Ginny Bracht (Stephen), Becky Pinegar (Elliott), Halley Hoffman (Paul), Tori Conway (Greg Jones) and Laura Slezak (Craig) and nine great grandchildren; The dear brother of 2 late siblings and the uncle of 2 nephews and 3 nieces. Bob will be cremated then buried at Spring Grove Cemetery, 4521 Spring Grove Avenue, Cincinnati, OH 45232 alongside his late wife, Virginia, with a family service at graveside. Arrangements entrusted to SCHOEDINGER NORTHWEST. In lieu of flowers, donations can be made in Bob's memory to LINKS (Lonely Instruments for Needy Kids). For a monetary contribution or donation of used instruments contact LINKS online at https://ccm.weshareonline.org/ws/opportunities/LINKS Or contact by phone/mail at 513 556 6638/ College-Conservatory of Music, LINKS, PO Box 210003, Cincinnati, OH 45221-003. To share memories or condolences, please visit www.schoedinger.com.

Robert Burns Wheeler Jr, 100, a longtime resident of Cincinnati passed away at his home in Columbus on Friday March 5, 2021. He was the beloved husband of the late Virginia (Henderson) Wheeler with whom he shared 65 years of marriage until her... View Obituary & Service Information

The family of Robert Burns Wheeler created this Life Tributes page to make it easy to share your memories.

Send flowers to the Wheeler family.