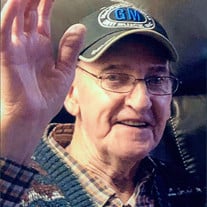 Robert Leslie Stewart, 83, of Gahanna, Ohio, passed away Monday, January 25, 2021. He was born March 31, 1937 to the late Ross and Elizabeth Stewart. He grew up around the Pomeroy, Ohio area. He attended school until eighth grade and quit school "because he was going to have to present a paper in front of the class, and was too shy to do it", so he never went back. It turns out that his life's work required public speaking. Bob married Dorothy Chaney and together they found the Lord in their early twenties. The Syracuse Church of Nazarene were picking up their children for Sunday school and Bob said, "if we're going to send them to Church, we should take them." Bob felt the call to ministry around thirty years of age and started attending classes at Mount Vernon Nazarene University. After graduation, Bob pastored at churches in Johnstown, Belpre, and Manchester, Ohio, serving around a decade in each pastorate. Of note, there were building programs in each pastorate. One of the most rewarding events in his service to the Nazarene Church was assuming the Prayer and Praise Ministry for Shepherd Church of the Nazarene. The prayer and Praise Ministry grew under his leadership, but he always referred to changed lives as it's success, not the numbers. Robert is survived by his wife of 65 years, Dorothy Stewart; son Rick (Janet) Stewart; daughter Tami Bick; daughter Sandie Winters (Bob); son Robert Stewart; daughter Debbie Orihood; 12 grandchildren; and 19 great-grandchildren. Funeral arrangements have been entrusted to SHOEDINGER NORTHEAST FUNERAL HOME. A visitation will be held Friday, January 29 at Shepherd Church of the Nazarene, 425 S. Hamilton Rd., Gahanna, from 11am to 1pm. A service will follow at 1pm with Pastor Greg Rosser and Pastor Tim Swanson officiating. Interment will take place Saturday, January 30 at Mifflin Township Cemetery, 218 Agler Rd., Gahanna, at 10:30am.

Robert Leslie Stewart, 83, of Gahanna, Ohio, passed away Monday, January 25, 2021. He was born March 31, 1937 to the late Ross and Elizabeth Stewart. He grew up around the Pomeroy, Ohio area. He attended school until eighth grade and quit school... View Obituary & Service Information

The family of Robert L. Stewart created this Life Tributes page to make it easy to share your memories.

Send flowers to the Stewart family.