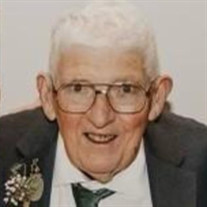 Robert "Bob" Sichel, 88, of Howard, Ohio (Apple Valley), was received into heaven on September 21, 2021 after passing away peacefully at Johnstown Pointe Nursing Home. Bob was the eldest child of five born to Frank and Margaret Sichel of New York City, NY (brothers Richard, Martin, and John, and sister Janet) on November 25, 1932, growing up in Briarcliff Manor, NY, playing baseball, caddying from a young age, and playing the violin. But it was years later while attending Michigan Tech in Houghton, MI, that Bob truly found his wings - entering the U.S. Air Force Aviation Cadet Program and in finding his true love and greatest friend in Johanna "Joan" Sichel (Kingstrom) of nearby Lake Linden, Michigan in 1952. As a career Airman in the United State Air Force, Bob started his air career in 1953. As a pilot, he trained in and piloted over a dozen different aircraft - among them the KC-135 refueling jet and the O-1 and O-2 as a Forward Air Controller while serving in Vietnam. Bob served honorably and with distinction, retiring with the rank of Major in 1973. He met his wife Joan on a blind date in 1952 and the two were married July 3, 1954 in Dearborn, Michigan. They moved about the country on a serviceman's tour that included California, Texas, Florida, Oklahoma, New York, and Ohio. In their years in Columbus, Bob and Joan were parishioners at St Philip the Apostle Church where Bob frequently served as lector and Eucharistic minister. Bob also volunteered at St. Philip and Bishop Hartley schools' bingo nights, where he will forever be memorialized as "Bingo Bob." Seeking a retreat for retirement where they could spend their golden years together, Bob and Joan bought property in Apple Valley and settled there. Perhaps not finding anything suitable to his tastes, Bob resolved to "do it himself" (with the aid of a few friends), and he did just that. Their home was the site of family occasions and celebrations too numerous to count - making memories aplenty for his children and grandchildren alike. A labor of love if there ever was one. As a resident of Apple Valley, he served his community as AVPOA Board President for many, many years. He took great pride in serving the community in any way possible, including as manager. Continuing to serve his faith community, Bob was active at St Luke's Church in Danville and as a member of the Knights of Columbus. Bob was the father to nine children and grandfather to 20 grandchildren and two great grandchildren -- all of whom came to call him "PopPop." He will always hold a place in the hearts and minds of his family whom he loved dearly and reveled in. He is preceded in death by his wife Joan, son Andrew, brother John, sister Janet Galluzzo, daughter-in-law Jennifer Sichel and his parents Frank and Margaret. He is survived and will be fondly remembered by brother Richard and Martin (Laura), and children, Todd (Bonnie), Margot (Brad) Ranney, Brian (Cathy), Beth Woodman, Marie (Matt) Caputo, Martin (Angie), John (Diane) and Joanne (Kyle) Kirves. He is also survived by grandchildren, Travis, Erin (Jon), Jacimar, Lilianna, Rachel (Tyler), Anthony, Georgianna, Thomas, Grant, Maggie (Nick), Jaret, Derek (Irene) Adam, John Jr. "Jack", Emily, Nicole, Benjamin, Megan, Nathaniel, and Nora. He was also blessed with two great-grandchildren, Eleanor and Michael. Calling hours will be Sunday, September 26, 2021 from 2pm to 6pm with a prayer service at 5:30pm at Schoedinger Funeral Home, 1051 E. Johnstown Rd. The Mass of Christian burial will be on Monday, September 27, at 10am at St. Philip the Apostle Church, 1573 Elaine Rd. Burial will be immediately following mass at St. Joseph Catholic Cemetery. In lieu of flowers, contributions can be made to the Prostate Cancer Prevention and Therapy Fund at the OSU James Cancer Hospital. Gifts can be made online at go.osu.edu/RobertSichel or by check mailed to The James at PO Box 183112, Columbus, OH 43218-3112, St. Philip the Apostle Catholic Church, Columbus, OH or St. Luke Catholic Church, Danville, OH.

Robert "Bob" Sichel, 88, of Howard, Ohio (Apple Valley), was received into heaven on September 21, 2021 after passing away peacefully at Johnstown Pointe Nursing Home. Bob was the eldest child of five born to Frank and Margaret Sichel of New... View Obituary & Service Information

The family of Robert "Bob" Sichel created this Life Tributes page to make it easy to share your memories.

Send flowers to the Sichel family.