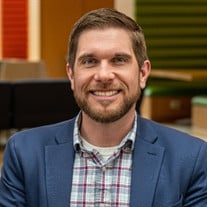 Robert Louis Adams passed away unexpectedly Feb. 7, 2021. Rob was born to Robert and Paula (Lang) Adams on Sept. 4, 1980, in Jacksonville, North Carolina. Several years later, the family moved to Cambridge, Ohio, where Rob spent his childhood and graduated from Cambridge High School in 1998. He went on to earn his Bachelor of Science in Communications - Video Production from Ohio University (OU) in 2003. Rob's love of OU and the Athens community ran deep, and he made several trips "home" to Athens each year. In 2018, Rob channeled his love of books and libraries, and talent for organization into a Master of Library and Information Science from Kent State University. With his new degree and more than 13 years of video and live events experience at Nationwide, he was able to move into a Digital Preservation Contractor role with OCLC and then was offered a full-time position at the beginning of 2020 as a Video Content Coordinator. Rob was energized by his work at OCLC, believed in what they were doing as an organization and adored the people he worked with. Rob was a fiercely loyal friend, an amazing husband and best friend to his wife of more than two years, Marjean (MJ) Remy, and a devoted father who always described his daughter, Zoë Lauren Adams, as the best thing that ever happened to him. Zoë and Rob shared a passion for graphic novels, reading, movies, art and music. In fact, Zoë has been taking drum lessons and Rob had taught himself to play guitar during the past few years, so there had been talk of them forming a band, with MJ on triangle. In addition to his wife and daughter, Rob is survived by his parents, Bob and Paula of Cambridge; his brothers Jarrod (Lindsey) Adams of Aurora, Colorado; and Sean Adams of Cuyahoga Falls, Ohio; as well as nephews Jackson and Henry Adams; maternal grandmother Charlotte Lang of Marietta, Ohio; and numerous aunts, uncles and cousins. He's also survived by his dog, Clifford, who he said was his arch nemesis, but whom he would often be caught cuddling with on the couch. If Rob had written this, it would have been full of his humor and wit, which will be impossible to replace and sorely missed. His laugh was contagious and will be one of a million things that those who loved him will remember fondly. He loved bringing people together to have fun and was the center of any social gathering he planned, always making sure people were enjoying themselves. Once the pandemic is under control, a celebration of his life will be held in his honor. A visitation for friends and family will be held on Saturday, Feb. 13 from 2-5 p.m. at Schoedinger Funeral Home in Worthington, 6699 N. High Street. Masks are required for all attendees. In lieu of flowers, the family requests donations be made to Zoë's 529 college savings plan or a charity of your choice in Rob's name. To donate to Zoë's college fund, visit http://www.Ugift529.com and enter the code P6N-X4R.

The family of Robert "Rob" Louis Adams created this Life Tributes page to make it easy to share your memories.