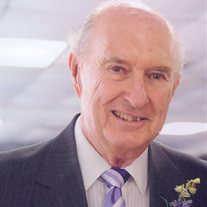 Robert F. Redmond, Sr. age 94, passed away peacefully with his wife at his side on Wednesday, January 5, 2022. Robert was born in Indianapolis, Indiana to the late John and Marguerite Redmond. Also preceding in death were his first wife Mary Catherine Redmond; brother John Redmond; and sister Alice Gong. Robert was the second oldest of eight siblings. During his school years he worked a series of interesting jobs beginning as a soda jerk from there he moved on to copy boy at the Indianapolis Star. One summer he even headed out to Oregon and worked on a lumber camp. Upon graduating from Arsenal Technical High School in 1945, Bob enlisted in the Army. He was sent to West Point where he served as military police. He received an honorable discharge at the end of 1946. Using the GI Bill, Bob went back to Indianapolis and enrolled at the Purdue extension campus. He later transferred to the main campus at West Lafayette where he graduated with a chemical engineering degree. Oakridge, Tennessee was Bob's next destination. There he received his Master's Degree in Math at the University of Tennessee while working at Oak Ridge National Labs. In 1952, Bob wed Mary Catherine Cangany from Indianapolis. They lived in Oak Ridge for less than a year before moving to Columbus, Ohio where he took a job at Battelle Memorial Institute. Robert worked as a research scientist at Battelle for 17 years. During his time at Battelle, Bob earned his Ph.D at The Ohio State University in Nuclear Physics. In 1970, he left Battelle to become a professor of Nuclear Engineering. During his tenure at the Ohio State University, Dr. Redmond served as the Chairman of the Nuclear Engineering Dept., The Associate Dean of the College of Engineering (1976-90) and Acting Dean of the College of Engineering until his retirement in 1992. Upon leaving the University Dr. Redmond was designated professor emeritus of mechanical engineering and associate dean emeritus. During his tenure in the Dean's Office Dr. Redmond was a trustee of the Argonne University Assoc. (1972-80) and served as the Vice-President in 1976 and 1977, member of the Ohio Power Siting Commission (1978-82), Trustee of Edison Welding Institute (1988-92), member American Nuclear Society, serving as Chairman of the Southwestern Ohio Section, National Regulatory Research Institute Board of Directors (1988-1992), Transportation Research Center Board of Directors, Member AAAS, American Society of Engineering Educators, Sigma XI, Tau Beta Pi. But all of these accomplishments can't begin to describe Bob Redmond. He loved to golf with his sons and former colleagues, walking the OSU golf course well into his 80's, hoping if he golfed long enough his golf score might meet his age. The highlight of his golfing career was his hole in one. He loved to read, especially history. It was a love he passed down to more than one of his children and grandchildren. And his passion and skill for bridge and chess and the stock market are well known. Bob loved to cheer on the Buckeyes and the Boilermakers, just not when they played each other. Robert was a man of faith, devoted to his Church. He was a long-time member of St. Agatha Church where he formerly lectured. But most of all, Bob was devoted to his family and they are his greatest legacy. A devoted husband, father, grandfather, great-grandfather and brother. Bob's goal in life has always been to be there for his family. Robert will be lovingly missed by his wife Carole Jacobs Redmond; children Catherine Redmond Kurth, Robert F Redmond Jr. (Teresa), Kevin P. Redmond (Janice), Thomas E. Redmond (Julia), John R. Redmond; 15 grandchildren; 25 great-grandchildren; Step children, Ted Jacobs, Karen Humrichouser, Doug Jacobs (Sandy), Tom Jacobs, 9 step grandchildren and 15 step great-grandchildren, and brothers, Paul Redmond (Carol),David Redmond, Tom Redmond (Kay), Dick Redmond (Carolyn) and sister, Rita Brown. Mass of Christian Burial will be held at 11:00am on Wednesday, January 12, 2022 at St. Agatha Catholic Church, 1860 Northam Road, UA 43221, where family will receive friends 1 hour prior. In lieu of flowers memorial contributions may be made to The Ohio State University Foundation, c/o: College of Engineering (303752), PO Box 710811, Columbus, Ohio 43271 or St. Vincent DePaul Society at St. Agatha. Please visit www.schoedinger.com to share memories and condolences. Funeral arrangements entrusted to SCHOEDINGER NORTHWEST.

Robert F. Redmond, Sr. age 94, passed away peacefully with his wife at his side on Wednesday, January 5, 2022. Robert was born in Indianapolis, Indiana to the late John and Marguerite Redmond. Also preceding in death were his first wife Mary... View Obituary & Service Information

The family of Robert F. Redmond, Sr. created this Life Tributes page to make it easy to share your memories.

Robert F. Redmond, Sr. age 94, passed away peacefully with his...

Send flowers to the Redmond family.