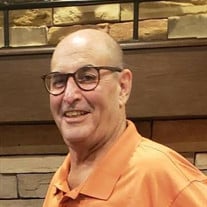 Robert H. Miller, 71, of Gahanna, passed peacefully at home on January 13, 2022 surrounded by family. Robert was born in Cleveland, Ohio, on November 25, 1950, to Samuel Lawrence & Rachel Ollick Miller in the midst of a memorable snow storm. He graduated from Cleveland Heights High School in 1968. Robert then moved to Columbus and received his bachelor's degree from The Ohio State University in 1972 where he was an active member of Alpha Epsilon Pi. Robert enjoyed tennis, golfing, and could be found at the soccer field for many years as a coach and referee. Longtime supporter of the Crew, the OSU Buckeyes, the Cleveland Browns and Indians. In retirement, Robert took pride in delivering meals to shut-ins for Meals on Wheels. He was also a longtime member of the Gahanna Lions Club. He shared many memorable moments with the "Mulliganders" and the "Usual Suspects". Robert was raised in a Jewish home and he continued to observe those traditions and holidays. He attended Stonybrook United Methodist Church in Gahanna with his family. For many years he looked forward to cooking with the United Methodist Men for their Annual Spaghetti Dinner. Robert is preceded in death by his parents, Samuel Lawrence & Rachel Ollick Miller, and brother Gary Lee Miller. He is survived by his wife of 38 years, Diane Cottrill Miller of Gahanna, children Michael, his wife Erin Miller of Pataskala, and Sarah, her husband Daniel Naderer of Fostoria. Robert was over the moon to be called Zayde to 3 grandchildren: Graham Lawrence Miller, Landon Jeffrey Miller, and Makenzie Lynn Naderer. Services will be held at SCHOEDINGER NORTHEAST FUNERAL HOME, 1051 East Johnstown Rd., Gahanna, OH 43230 on Wednesday January 19, 2022. Visitation from 11am - 1pm with service immediately following. Procession for burial at Mifflin cemetery will follow the service. For everyone's protection the family requests that all attendees kindly wear a mask. The service will be webcast for those unable to attend. In lieu of flowers please make a contribution in Robert's name to The Stonybrook United Methodist Men (485 Cherry Bottom Rd., Gahanna, OH 43230), The Gahanna Lions Club (125 Moorefield Dr., Gahanna, OH 43230) or a charity of your choice. Robert's family would like to thank the staffs of the The James Solove Cancer Center, HealthPro Home Care, the "angels" of Hospice of Central Ohio as well as all our friends and neighbors who supported us through this journey.

Robert H. Miller, 71, of Gahanna, passed peacefully at home on January 13, 2022 surrounded by family. Robert was born in Cleveland, Ohio, on November 25, 1950, to Samuel Lawrence & Rachel Ollick Miller in the midst of a memorable snow storm.... View Obituary & Service Information

The family of Robert Miller created this Life Tributes page to make it easy to share your memories.

Robert H. Miller, 71, of Gahanna, passed peacefully at home on...

Send flowers to the Miller family.