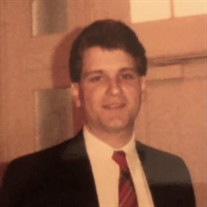 Robert “Andy” Lape was born to be a personality. Much of his youth was spent meticulously taking apart motorcycles, go-karts and model cars. He would have parts strewn all over as he reconstructed his machines. Some of his happiest days were in Cedarville, Michigan, as he and his Uncle Bobby Altmaier built an extremely fast, but more than slightly unstable, boat they named the Blue Max. However, he found his true home as he assembled his tribe at Columbus Academy. He and his cohorts would set forth from Custer Brothers in his Blue Chevy Chevette with AC/DC blaring at full volume, modern day Huckleberry Finns, to discover the world. Like youth everywhere, some of the adventures were worth recounting, some (an attempted high school trip to the Anheuser Busch factory for one) were better remembered as crazy youthful misadventures. Andy was most comfortable as the master of ceremonies. He was part Rodney Dangerfield, part P.T. Barnum. He would whip the crowd up into a frenzy with his exhortation to “Wind It Up!” He reveled his whole life in memories of parties with his friends and CSG, of his slightly aggressive soccer and athletic career, and of the pranks he loved to play. “A.L.”’s penchant for bestowing creative nicknames was very well known, if not always appreciated by the recipients. Just ask Goldzilla, Poundum Ray, The Crusher, P-Dog, Monster Man, Slim, Screw Loose, and Quackie. Andy achieved much success in his career as a salesman, working nearly his entire career for The Janton Company. He also loved to trade stocks and provide investment tips. But he struggled to find his place in the world as time marched on and relationships lacked the intensity of youth. His friends and family will always remember him as a sweet soul who promised loyalty and love to those he cared for. Andy died on March 1, 2021 after suffering a stroke. He was preceded in death by his father, Robert Lape. He is survived by his mother, June Loving, of Columbus and The Villages, FL, brother, Edwin “Ted” Lape (Kelly) of Upper Arlington; brother, Sean Cochran of Denver and multiple nieces and nephews. A memorial service will be held 2p.m. Saturday, June 12 at SCHOEDINGER STATE STREET CHAPEL, 229 East State Street, followed by a “Celebration of Life" for all family and friends immediately thereafter from 3:00 to 5:30 p.m. at Scioto Country Club, in lieu of calling hours.

Robert &#8220;Andy&#8221; Lape was born to be a personality. Much of his youth was spent meticulously taking apart motorcycles, go-karts and model cars. He would have parts strewn all over as he reconstructed his machines. Some of his happiest... View Obituary & Service Information

The family of Robert Andrew Lape created this Life Tributes page to make it easy to share your memories.

Robert “Andy” Lape was born to be a personality.

Send flowers to the Lape family.