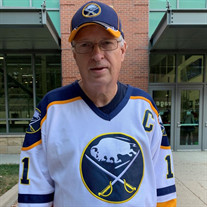 Robert Timothy ("Tim") Koshinsky, 72, of Delaware, Ohio passed away peacefully surrounded by his family on December 27, 2021, after a valiant struggle with AL Amyloidosis. Born on July 4, 1949, to Robert and Emma Koshinsky in Northampton, Massachusetts, Tim graduated from Ludlow High School (class of 1967). He attended Boston University, majoring in Political Science, and graduated in 1971. Tim began what became a lifelong career devoted to retail with his first position as assistant manager at F.W. Woolworth - working in Pittsfield, Massachusetts to Burlington, Vermont. In increasing capacities, he worked in a variety of enterprises such as the Ben Franklin stores and National Nail. Eventually, he took training in the newer field of applying computing to all facets of the retail process. Tim next became associated with such firms as Dataworks, Retek, IBM, and OLR to consult with retailers on implementing / upgrading computing systems to be in sync with their business practices / objectives and to advance profitability. He retired from OLR, his final firm, as Global Vice President for Solutions. His more recent positions enabled him to work and travel broadly, including in England, Mexico, Central America, Australia, Thailand, Dubai, Finland, and Sweden. Retiring in 2016, Tim enjoyed visiting with family, pursuing more travel, becoming a 1,000-piece puzzle devotee, playing golf, and in very recent years, making an elaborate setting for his model trains. Predeceased by his parents, Robert Joseph Koshinsky and Emma Catherine Urquhart Koshinsky, Tim leaves behind his devoted wife of 26 years, Deborah Husted Koshinsky. He is also survived by his beloved children, Melissa (Stanley) Armstrong, Jessica (Paul) Dieteman, Michael (Diana) Koshinsky, and stepdaughter Hilary (Wil) Clark, and he is survived by his much-loved grandchildren Jack, Rylie, Alexa, Ariyan, and step-grandchildren Madelyn and Ava. He is further survived by his sister Shelley (Steve) Quesnel and brother Daniel (Betty) Koshinsky, brother-in-law Rob (Nancy) Husted, sister-in-law Marty Hoffelt-Husted, and nephews, nieces, and cousins. Because of concerns about the high levels of COVID transmission, services will be held at a later date. In lieu of flowers, the family requests donations be made to the Humane Society of Delaware County (see link below), an organization with a mission of keen importance to Tim. https://link.schoedinger.com/DelawareCountyHumaneSociety

Robert Timothy ("Tim") Koshinsky, 72, of Delaware, Ohio passed away peacefully surrounded by his family on December 27, 2021, after a valiant struggle with AL Amyloidosis. Born on July 4, 1949, to Robert and Emma Koshinsky in Northampton,... View Obituary & Service Information

The family of Robert Koshinsky created this Life Tributes page to make it easy to share your memories.