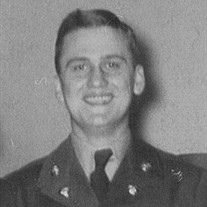 Robert J. Hunt, Sr. passed away on September 23, 2020. He was preceded in death by parents Charles J. and Maggie Belle Hunt; brothers Paul F. and Gerald F. Hunt; and sister Martha McDaniel. He is survived by his wife of 70 years, Betty; four children, Robert J. Jr., Teri, Tammy and Ron; nine grandchildren; 12 great-grandchildren; nephews, nieces and friends. He was loved and cherished by family and friends. Bob was a veteran of the Korean War where he served as an instructor at an NCO academy in Germany. He was a graduate of Bliss College where he served as a Professor of Accounting after graduation. He was employed by the Ohio Department of Highways as a Division Auditor, by the City of Columbus as Fiscal Officer of the Public Service Department, by Port Columbus Airport as Assistant Superintendent, and as Interim Director of Aviation at Fort Lauderdale International Airport. He retired in 1992. Bob was an Accredited Airport Executive and Executive Emeritus. He was a Past President of the Ohio Airport Managers Association, Past President of the Great Lakes Chapter of the American Association of Airport Executives, and Past President of the Southwest Chapter of AAAE. He was also active in the Ohio Public Works Association having served as President, Secretary, Auditor and Director. Bob was an Adjunct Assistant Professor at the Ohio State Aviation Department where he taught Airport Planning and Management. Bob attended Grace Brethren Bible Studies in recent years and served in Prison Ministry at Marion Correctional Institute. Family will receive friends from 5:00 to 8:00 p.m. on Monday, September 28, at SCHOEDINGER NORTHWEST CHAPEL, 1740 Zollinger Road, Columbus, where a funeral service will be held at 10:00 a.m. on Tuesday, September 29. Interment at Union Cemetery. Guests are respectfully asked to wear masks and attendance will be monitored to ensure safety for everyone attending. Donations in memory of Robert can be made to Kobacker House, c/o OhioHealth Foundation, 3430 OhioHealth Pkwy., Columbus, OH 43202 or Samaritan's Purse, PO Box 3000, Boone, NC 28607.

Robert J. Hunt, Sr. passed away on September 23, 2020. He was preceded in death by parents Charles J. and Maggie Belle Hunt; brothers Paul F. and Gerald F. Hunt; and sister Martha McDaniel. He is survived by his wife of 70 years, Betty; four... View Obituary & Service Information

The family of Robert James Hunt created this Life Tributes page to make it easy to share your memories.

Send flowers to the Hunt family.