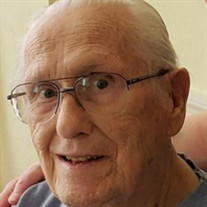 Robert "Bob" Ernest Hahn Jr, 88, of Fort Myers, Florida and Westlake, Ohio, passed away peacefully on December 6, 2021 at Doctors Hospital in Columbus, Ohio. Bob was born in Cleveland, Ohio to Robert and Pearl Hahn on March 8, 1933. Bob was a proud veteran of the US Navy, serving during the Korean War. He was married for 60 years to Jane (Grattan), deceased. Bob worked as a Manager for Western Electric for 38 years, retiring at age 58. Bob loved to fish, bowl, play cards, and was an avid fan of OSU and Browns football. He was a longtime member of the Fairview Park Kiwanis, the Tin Can Sailors, and Messiah Lutheran Church. Bob is survived by his Children; Jeff (LeeAnne), Tracy (Virginia) and Erich (Marilyn), Grandchildren Andrea (Will), Jesse, Jason, Lauren, Carol and David (Brianna), and Great Grandchildren, Eli and Eva, and many nieces and nephews. Bob was preceded in death by his wife Jane, his father and mother, and sister Virginia Hemsath. In lieu of flowers, memorial donations may be made to the hospice of your choice. The family wishes to extend their gratitude to his caregiver Mary Caputo, and the staff at both Doctors Hospital and Westerwood Assisted Living. A celebration on Bob's life will be planned in the future. Arrangements By SCHOEDINGER EAST FUNERAL HOME, 5360 E. Livingston Ave., Columbus, OH 43232.

The family of Robert Hahn created this Life Tributes page to make it easy to share your memories.

Send flowers to the Hahn family.