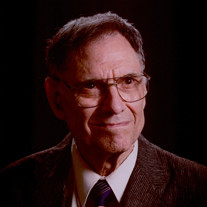 Robert (Bob) Merle George, bon June 26, 1928 to Merle and Ruby (Jones) George in Olustee, OK. They moved to Columbus, OH after the "Dust Bowl". In 1944 he went to work at Timken at age 16 to help his family. In 1950 he went into the Airforce for 4 years. Bob also bought a brand-new Ford Convertible and got married. On Sept. 10, 1950 he married Dorothy Ruth Travis. They met at Linden Church of Christ. Dad was President of the Christian Endeavor. Bob worked at Timken just over 32 years as a machinist and retired in 1976. He then went to work at GE as a machinist. He worked there for 12 years and retired in 1988. He had two full pensions. He went into the U.S. Airforce in 1950-1954 during the Korean War. He was stationed at Lockbourne Airforce Base (now Rickenbacker) the 4 years. He never left Ohio but went to Youngstown for a short time. He did go somewhere for training in one of the New England States. He was a Staff Sergeant and fueled the airplanes and trained drivers on the trucks. Bob is preceded in death by his loving wife of 61 years, just 2 months shy of 62 years; parents, brother, Fred George, sister, Eurith (Peg) Lloyd McGlinchey, and best friend Jerry Smith. He is survived by his 3 children, Brenda (Danny) Williamson, Carol (Bob) Kinney and Mark (Brenda) George, 13 grandchildren, 24 great grandchildren, and 3 great-great grandchildren, brothers-in-law Charles (Mary Lou) Travis and Gordon (Connie) Travis, many nieces, nephews, cousins, and friends. He is a member and was an elder at North Park Church of Christ, which was Minerva Park Church of Christ prior to merging with Northeast Church of Christ. Bob's family will receive friends at North Park Church of Christ 4938 Westerville Rd, Columbus, on Friday December 18, 2020 from 3-5pm with a funeral service to follow at 5pm. Officiant, Steve Petty. Interment at Forest Lawn Memorial Gardens on Saturday December 19, 2020 at 12pm. Guests are respectfully asked to wear masks and attendance will be monitored to ensure safety for everyone attending.

The family of Robert (Bob) M. George created this Life Tributes page to make it easy to share your memories.

Send flowers to the George family.