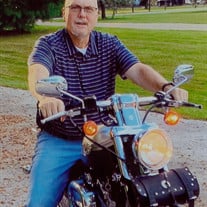 Robert Joseph Douglas III, age 64, of Baltimore, Ohio, passed away peacefully at Mt. Carmel East Hospital in Columbus, Ohio on December 8th, 2021. He was born August 8th, 1957, in Michigan. Bob is survived by his best friend and spouse of 13 years Kathy Douglas, children; Aaron (Madeline) Douglas, Pickerington, OH, Hannah (Aaron) Douglas, Columbus, OH, Trenton (Madison) Douglas, South Dakota, and Morgan (Drew) Wood, Lancaster, OH, step-children; Brakken (Michelle) Davis, Landen Davis, Jace (Vanessa) Davis, Shalee (Rex) Price and Samantha (Redge) Sutton, mother, Janet Douglas, brother, Kerry Douglas, and 15 grandchildren which he loved so much, along with many other dear family and friends. He is preceded in death by his father, Robert J. Douglas Jr. Bob worked for Dell Computers and had a great team which he enjoyed. Bob had an excellent work ethic, he was admired by many coworkers, as well as management. If you were to ask Bob what his greatest accomplishments in life were, he would with no doubt say his family. He LOVED his family. Bob adored outside sports including four wheeling, motorcycles, camping and hiking. He served multiple years as a boy scout leader with our church. The boys had only good things to about Bob. He was born and raised in Michigan, which gave him the great love of the ocean. If you ask anyone what they would say about Bob, the first word that came to mind from multiple sources is "Integrity". Bob was the most loving, caring, honest and supportive human being. He truly was a hero to many. He would always say "If I don't have my word, I have nothing!". Bob will be greatly missed by SO many. Family will receive friends Thursday, December 16th, 2021, from 10AM-12PM at the Church of Jesus Christ of Latter-Day Saints, 2135 Baldwin Rd, Reynoldsburg, OH 43068, with a funeral service to follow at 12PM.

Robert Joseph Douglas III, age 64, of Baltimore, Ohio, passed away peacefully at Mt. Carmel East Hospital in Columbus, Ohio on December 8th, 2021. He was born August 8th, 1957, in Michigan. Bob is survived by his best friend and spouse of 13... View Obituary & Service Information

The family of Robert Douglas created this Life Tributes page to make it easy to share your memories.

Send flowers to the Douglas family.