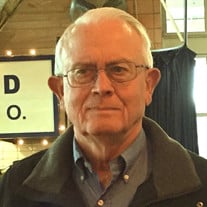 Robert "Bob" Burkle Cobie, of Plain City, Ohio was born in Ackley, Iowa, on April 22, 1941, to the late Adeline Burkle (1918-1981) and Howard Max Cobie (1913-1985). They owned the Cobie Hardware Store in Ackley. Bob was the beloved husband of Nancy McMaster and they were married in 1971 in Ohio and recently celebrated their 50th Wedding Anniversary. He was a 1959 graduate of Ackley Iowa High School, and graduated from Iowa State University with a Bachelor of Science degree in Ceramic Engineering. In 1971, he earned his MBA from the University of Michigan. Bob started his career in the Ford Motor Company, Glass Division, in 1963. He later joined Guardian Industries in Detroit and became engineer and plant manager of a new plant with over 600 employees that produced Float Glass. In 1977, he helped build Tempglass Western, a glass tempering plant in Fremont, CA., and became President of the plant. In 1985, he joined AP Technoglass in Bellefontaine, OH as a Vice President/Plant Manager. He retired in 2002. Bob had a positive attitude and enjoyed working with people and learning everyone's name. Bob was very good with numbers and could do complex math in his head. Bob gave generously of his time and was very active in various organizations including Chairman of the Mary Rutan Hospital Board, President of the Bellefontaine Community Growth Committee Board, Logan County Chamber of Commerce Board, First United Presbyterian Church Elder, and Liberty Presbyterian Church of Delaware Elder. He enjoyed gardening, playing cards, bowling, and stained-glass projects. He was a University of Michigan and San Francisco 49ers football fan. He especially liked getting out and playing golf as a member of The Muirfield Village Country Club. He loved traveling and toured the United States, Australia, Japan, Europe, and other places. He went on many fishing expeditions. He and his wife took a memorable trip around the world after he retired. He especially enjoyed spending time with his family. He and his wife, Nancy, spent many winters in Arizona. He was preceded in death by his brother, Barton Cobie. He is survived by his loving wife; their children, Heather (Rob) Merkle of Plain City, OH and Jennifer (Tad) Sliwak of Pleasanton, CA; grandchildren, Ethan and Evan Merkle and Avery and Alexis Sliwak; many nieces and nephews. The family suggest donations in Bob's memory to the Alzheimer's Association, 1379 Dublin Road, Columbus, Ohio 43215. Funeral service 11:30am Saturday, July 17 at Schoedinger Dublin, 5980 Perimeter Dr, where family will receive friends one hour prior. Interment New California Cemetery, Plain City, OH. Family requests memories be shared by video at https://bit.ly/3jZdJYG. A livestream of the service will be available to watch at www.schoedinger.com.

The family of Robert Cobie created this Life Tributes page to make it easy to share your memories.

Send flowers to the Cobie family.