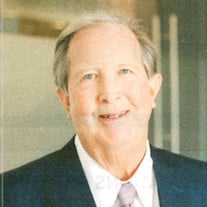 Robert ("Bob") Brainard Barnett, Jr. of Dublin, Ohio, passed away at the age of 71 on Sunday, September 20, 2020. Bob was born on July 24, 1949, in Cleveland, Ohio, to Robert and Ruth (Woodruff) Barnett. He graduated from Fairview High School in 1967, and moved to Columbus, Ohio, to attend The Ohio State University. Bob pledged Sigma Phi Epsilon and spent the best four years of his life with all of the brothers an only child could ever want. In 1971, Bob earned his BS in Business Administration, and in 1975, he became a double Buckeye when he earned his law degree, cum laude, and found his calling. He spent his entire career as a trust and estate attorney with the law firm of Carlile Patchen and Murphy LLP, and 2020 marked his 45th year as a lawyer. Bob served as Managing Partner for over a decade and grew the firm's estate planning group from two attorneys to thirteen. He was a Fellow of The American College of Trust and Estate Counsel since 1989, and actively served on the Council (formerly Board of Governors) for the Ohio State Bar Association's Estate Planning, Trust, and Probate Law Section for decades. He also served as Chairman of the Columbus Bar Association Taxation, Estate and Gift Tax Committee and Probate Court Committee. On October 7, 1995, Bob married Julie Mankin Barnett and gained a stepdaughter, Katharine ("Kate") Ersly. Bob and Julie spent almost 25 years traveling, golfing, spending time with friends and family, rooting for Cleveland sports, watching Buckeye football, and most recently, wintering in Naples, Florida. Bob adored entertaining and friends remember him fondly as the life of the party. Bob's big personality earned him many nicknames from his lifelong friends, including Bullet, Bouncer, and Big Time Bob. His quick wit, fondness for storytelling and propensity to speak his mind put his friends at ease and his adversaries at odds. Bob's family, friends and clients were lucky to have Bob in their corner; he was always there for those who needed him. Bob was preceded in death by his father, Robert, and his mother, Ruth. He is survived by his loving wife Julie, and his stepdaughter, Kate. A celebration of life will be held when the pandemic has subsided. Donations may be sent to the Mid-Ohio Food Collective FKA Mid-Ohio Foodbank or The Ohio State University Moritz College of Law.

Robert ("Bob") Brainard Barnett, Jr. of Dublin, Ohio, passed away at the age of 71 on Sunday, September 20, 2020. Bob was born on July 24, 1949, in Cleveland, Ohio, to Robert and Ruth (Woodruff) Barnett. He graduated from Fairview High School... View Obituary & Service Information

The family of Robert Barnett Jr. created this Life Tributes page to make it easy to share your memories.

Send flowers to the Barnett family.