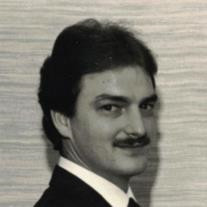 Robert "Bob, Bobby" Anderson, age 61, of Hamilton, passed away on Thursday, April 1, 2021, at OhioHealth Riverside Methodist Hospital in Columbus, Ohio. Born in Hamilton, Ohio, on June 26, 1959, he was the son of the late Kenneth and Doris (Fox) Anderson. Bob started riding motorcycles at a very young age. He joined the American Motorcyclist Association (AMA) as a professional round-track motorcycle racer, winning many races before having a driver's license. He became President of RAA Enterprises and Owner of Hildreth's Appliances. In 1989, Bob married Beth Seckel, his wife of over 31 years. Bob was an avid fisherman and hunter. He enjoyed fishing in many different areas of The United States and Canada. His favorite place to fish was at his family-owned lake in Bicknell, Indiana, known as the "Anderson Pit." Bob was a renowned jack of all trades. With his caring nature and ability to fix anything, he was never hesitant to lend a helping hand to his family and neighbors. If a problem or project presented itself; a broken refrigerator, car issues, or even a full kitchen remodel, everyone knew they could count on Bob. He was everybody's favorite smiling face and was loved by so many. Robert is survived by his wife, Beth Anderson; two children, Elizabeth Anderson and Nickolas Anderson; six siblings, Stephen (Mary) Anderson, Claire (Tom) Vogel, Tom (Brenda) Anderson, Susan Hart, Randy (Pam) Anderson, and Kenna (Greg) Ervin; and his two granddogs, Bones and Spicoli Anderson, both of whom he loved and cared for regularly. In lieu of flowers, please make a donation to the Franklin County Dog Shelter in memory of Bob: dogs.franklincountyohio.gov/Donate/

Robert "Bob, Bobby" Anderson, age 61, of Hamilton, passed away on Thursday, April 1, 2021, at OhioHealth Riverside Methodist Hospital in Columbus, Ohio. Born in Hamilton, Ohio, on June 26, 1959, he was the son of the late Kenneth and Doris (Fox)... View Obituary & Service Information

The family of Robert Anderson created this Life Tributes page to make it easy to share your memories.

Send flowers to the Anderson family.