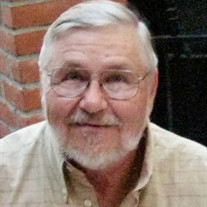 Robert Wilson Almoney Jr., M.D. passed away at home on Dec 15, 2021. Born to the late Robert W. and Virginia Almoney on Feb 25, 1940 in Dayton, Ohio. After graduation from Oakwood High School, he continued his education at Ohio State University, earning a B.Sc. in Anatomy followed with his Medical degree in 1966. Bob continued his medical training at Riverside Methodist Hospital where he completed his internship and residency in internal medicine, serving as Chief Resident in 1969. After residency, he completed a Fellowship in Endocrinology and Metabolism at OSU, and his research areas there included work on Islet cell transplantation and research in Medullary carcinoma of the thyroid. Bob served his country in the Army as a Maj MC acting as Chief of Medicine while at Ft. Stewart in GA. He spoke fondly of his time there, especially the older veterans he treated who introduced him to such delicacies as shad roe. Returning to Columbus, Bob began private practice at the Milhon Clinic, while continuing his love of teaching at Riverside as Attending Staff and Associate Professor at OSU. Riverside became his primary hospital, where he enjoyed the collegial atmosphere and the fellowship of the "doctors lunch room". It was at Riverside where he established one of the first in-hospital Diabetic Care Centers, something of which he was always proud. Feeling that patient education of disease management was of primary importance, he enabled patients to better deal with their health care in partnership. Bob met Ann Gerace MD in 1987 and married in 1989. Thus began a great romance of 32 years, a shared interest in many things led to too many adventures to enumerate, and many, many friends. Primarily an outdoor person, he was an early member of Central Ohio Fly Fishers, where he met lifelong friends such as Dick Foley and Bill Finney. He was an elegant caster of flies, and was incredibly patient and methodical in both fishing and tying flies. He was noted for his creativity, including one fly designated as "Bob's Gob" with questionable effectiveness. Bob was always happy in a trout stream most anywhere, but primarily on the Au Sable (MI) or Frying Pan (CO) When fishing became more difficult, sporting clays became a passion. Whether shooting competitively or for fun, he loved to instruct and analyze. "Lead it a little more" was often heard. He thoroughly enjoyed time spent with his shooting friends. As his health became more limiting, those close friends and colleagues became even more significant and cherished. Though not able to travel, he was grateful for visits and support from all. Sally Sligar, who unfailingly worked to keep him strong and mobile. And Drs. Michael Ports, Jud Milhon Jr, Gene Fu, and Steve Yakubov whose expertise, caring and incredible kindness was appreciated more than they know. Not to mention the close support of their neighbors and friends whose kindness was most meaningful in his final days. He was preceded in death by his parents, Robert W. Sr. and Virginia Almoney, of Dayton, OH and his sister Judith Ann Almoney of New York City. He is survived by his wife Ann, daughter Beth (John) Jacobs of Charlotte NC, granddaughter Savannah Jacobs of Easley, SC, son Rob (Cathleen Bonner) Almoney, III of Seattle WA, brother Dr. Doug (Anne) of Dayton, OH, niece Betsy (Mark) Reale of Boston, MA, and nephews Scott (Rain) Almoney of Telluride, CO and Dr. Bill (Jennifer) Almoney of Dayton, OH. The family will celebrate Bob's life at a later date. Donations in his memory can be made to Anglers of the Au Sable, or the education fund supported by both he and Ann, in memory of Dr. Charles A. and Martha W. Gerace at the Tri-Cities Tuition Mission Foundation. An online remembrance wall is also available at www.schoedinger.com.

Robert Wilson Almoney Jr., M.D. passed away at home on Dec 15, 2021. Born to the late Robert W. and Virginia Almoney on Feb 25, 1940 in Dayton, Ohio. After graduation from Oakwood High School, he continued his education at Ohio State University,... View Obituary & Service Information

The family of Robert W. Almoney Jr., MD created this Life Tributes page to make it easy to share your memories.

Send flowers to the Almoney family.