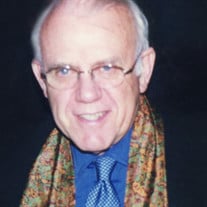 Dick M. Ward passed away on May 3, 2021. He was born February 16, 1933 in Denver, Colorado. He was preceded in death by his parents, William N. Ward and Nevilla E. Ward, by his first wife, Harriette F. Ward, and by his oldest son Richard M. Ward Jr, and by many friends and colleagues. He is survived by his wife, Jane P. Ward, his daughters, Melissa K. Ward of Arizona, and Sarah M. Williams (Christopher) of Upper Arlington, son, William D. Ward (Lauren) of Illinois, and daughter-in-law, Michele Ward. He is also survived by twelve grandchildren and three great-grandchildren. Dick was born and raised in Denver, Colorado. He attended Denver Public Schools and graduated from Denver South High school, with honors, in 1951. In 1950, before graduating, Dick won the Colorado State High school Broad (Long) Jump State Championship with a 22' 8.5" distance. Dick graduated from the University of Colorado's undergraduate school, and then graduated from the Medical School, with honors and an M.D. degree, in 1958. Dick served his medical internship and one year of surgical residency at the Ohio State University Hospital. He then served in the United States Air Force as a surgeon for two years. He returned to The Ohio State University Hospital for two years of orthopedic residency. His last year of orthopedic residency was served at the University of Michigan Hospital. In 1965 Dick joined Dr. Melvin Olix and Dr. Carl R. Coleman as a partner in the Columbus orthopedic practice of Coleman, Olix and Ward. As their practice expanded over the years, it is now known as Orthopedics One. During Dick's years of practice, he served a term as chairman of the Orthopedic Section at Riverside Methodist Hospital. He also served a term as president of the Central Ohio Orthopedic Society. Dick and his first wife, Harriette, raised their family in Upper Arlington, and enjoyed ongoing visits from children and grandchildren once their children were grown. Harriette's untimely death occurred in 1991. In 1992, Dick met Jane through mutual friends, and they married at Christmas in 1992. Dick continued to practice Orthopedics until his retirement at the time when the medical practice expanded to become Orthopedics One. Dick was an avid gardener for many years, with a special interest in hybridizing the garden perennial, Hosta. Dick registered approximately 200 cultivars, and many of them are now available in nurseries globally. Dick also won the American Hosta Society's highest award for hybridizing hostas., the Eunice Fisher Award, in 2010, before he and Jane moved into a retirement apartment at Goodale Landing in 2016. Contributions may be made in memory of Dick to: The First Congregational Church, 444 East Broad Street, Columbus, OH; The Grange Audubon Columbus OH, 505 W Whittier St, Columbus, OH 43215. The American Hosta Society. Celebration of Life will be held from 4-7 PM on Friday, July 16, 2021 at SCHOEDINGER NORTHWEST, 1740 Zollinger Road, Upper Arlington, Ohio 43221.

Dick M. Ward passed away on May 3, 2021. He was born February 16, 1933 in Denver, Colorado. He was preceded in death by his parents, William N. Ward and Nevilla E. Ward, by his first wife, Harriette F. Ward, and by his oldest son Richard M.... View Obituary & Service Information

The family of Richard M. Ward created this Life Tributes page to make it easy to share your memories.

Send flowers to the Ward family.