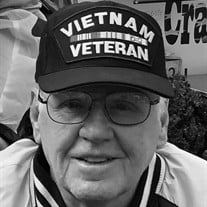 Richard Thomas Schneider of Columbus Ohio, born May 13, 1933 in Oil City, Pennsylvania, passed away September 8, 2021 after a battle with dementia and a sudden stroke. He was preceded in death by his parents Virginia and Thomas, his brother Bill and sister Marge Ransome, brother-in-law Ed Milner, and son-in-law Kenny McJunkin. On August 4th, 1981, he married his love Marial Griffith, and they spent 40 happy years together. He is survived by his wife Marial and his sister Bonnie Milner, as well as three daughters: Deb (Tony) Harris, Karen (Joe) Rowan, Diane McJunkin, two step-sons, Charlie (Sherry) Breitenbach and Thomas Griffith. He has seven grandchildren and four great-grandchildren: Tasha (Jason) Grafton - Nadia and Arek, Alex (Tina) Rowan - Roselina and Olivia, Carmen Harris, Andrew Harris, Jennifer Breitenbach, Thomas Griffith, and Alex Griffith. He served his country proudly for twenty-five years, three years in the Army and twenty-two years in the Air Force; including one year in Vietnam. He retired from the Air Force while stationed in Dayton at Wright Patterson Air Force Base. He also did guard duty/civil service at Rickenbacker Air Force Base for thirteen years. He was an avid sports fan watching the Pirates, Notre Dame, and his beloved Steelers. Fighting with his daughters and their choice of the Bengals as their sports team. Some of his greatest joys came from going to his grandson Andrew's high school football games and his grandson Alex R's college football games. He also loved seeing and facetiming with his great-grandchildren. A visitation will be held Sunday, September 12 at SCHOEDINGER NORTHEAST FUNERAL HOME, 1051 E. Johnstown Rd., Gahanna, from 6pm to 8pm. A graveside service will be held Monday, September 13, at Forest Lawn Memorial Gardens, at 12pm. Following the graveside service, a light luncheon will be served at Village of Blacklick Creek in the clubhouse (57 Villa Creek Drive, Reynoldsburg, OH 43068). In lieu of flowers, family requests you donate to Make A Wish, Mended Little Hearts, and/or the Cystic Fibrosis Foundation.

Richard Thomas Schneider of Columbus Ohio, born May 13, 1933 in Oil City, Pennsylvania, passed away September 8, 2021 after a battle with dementia and a sudden stroke. He was preceded in death by his parents Virginia and Thomas, his brother... View Obituary & Service Information

The family of Richard T Schneider created this Life Tributes page to make it easy to share your memories.

Send flowers to the Schneider family.