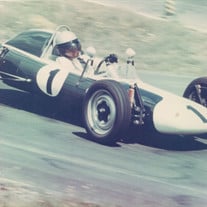 Richard James “Dick” Patton, age 82 of Upper Arlington, passed away peacefully, Monday, August 9, 2021. Dick was born in Cincinnati, son of the late Norbert R. and Marguerite M. (Franey) Patton. Dick lived briefly in Cincinnati and Pittsburgh, Pennsylvania, before moving to Columbus at the young age of 10. He graduated from North High School, Class of 1957 and Otterbein College, Class of 1961, and attended Law School at Franklin University from 1961-1963. Following college, Dick married the love of his life, Jean Richardson, and the two of them went on to share in 57 years of marriage. Dick was an extremely intelligent and industrious man with an entrepreneurial spirit. He worked at Lawyers Title from 1961-1966, Exact Weight Scale from 1966-1970, started “Bucket Seat” from 1964-1967, was a “Snap-on Tools” dealer from 1970-1975 and finally opened “Hilliard Schwinn” in 1976 where he remained until his retirement in 1986. Dick had an outgoing and adventurous personality. If you knew Dick, you knew that Dick was most passionate about being a race car driver. He was a SCCA National driver and participated in many races between 1966-1969 and he loved nothing more than to share his stories with anyone he met. Cycling, traveling, and reading were all activities that Dick appreciated in his life despite losing his eyesight in 1974. He was a 32-year member of the Wally Byam Airstream Caravan Club and a 25-year member of Family Motor Coach Association and enjoyed spending the winter months in Florida with friends. He will be greatly missed by his beloved wife, Jean Patton; sister, Roberta (Walter) Deemer; sister-in-law, Janet (Norm) Hedman; many nieces, nephews, great nieces and nephews, and dear friends. In lieu of flowers, contributions may be made to Newsreel, Inc., 5 E. Long St., Suite 1001, Columbus, Ohio 43225 or to Capital City Hospice, 2800 Corporate Exchange Dr., Suite 170, Columbus, Ohio 43231.

The family of Richard James "Dick" Patton created this Life Tributes page to make it easy to share your memories.

Send flowers to the Patton family.