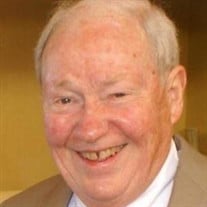 Richard Rizer Murphey, Jr., beloved husband of the late Ruth Shaw Murphey and father of Richard Rizer Murphey III and Michael Shaw Murphey, passed away of natural causes on Christmas Day 2020. He was 95 years old. Dick was a self-made man and a natural leader who had a positive impact on nearly everyone and everything he touched. He was born in 1925 to Richard and Geneva Murphey and spent most of his childhood in Virginia. Dick had one brother, Shawn, and two sisters, Patricia, and Barbara. One of his fondest memories from his childhood were the summers he spent with his grandparents, Mama and Daddy Lamb, in the southern Ohio town of Corning. Dick pursued his undergraduate degree at Washington University in St Louis. It was there he meet the love of his life and future wife, Ruth. Dick then went to Harvard University to obtain a Juris Doctor. Ruth and Dick were then married in 1951 and moved to Columbus where Dick began a very successful law career. Dick practiced law in Columbus for over 50 years, originally with the firm of Dunbar, Kienzle and Murphey and later as Senior Partner of its successor firm, Murphey, Young and Smith. Dick finished his career with Squire, Sanders and Dempsey, which acquired Murphey, Young and Smith in 1991. Dick retired from active legal practice in 2005 at the age of 80. During his career Dick worked with many of the city's leading companies and served as a board director with several prominent local enterprises. Dick was a strong supporter of Columbus. His civic and charitable work included a Life Member designation with the Columbus Salvation Army, a long-standing position on the board of the Ohio State University Hospital System, and leadership positions with the Columbus Symphony Orchestra. In retirement, Dick continued to help his community though his service at the Mid-Ohio Food Bank. Dick loved his family, and was a devoted husband, father, and grandfather. He and Ruth enjoyed a 44 year marriage until Ruth's passing in 1995. Nothing was more important to him than his wife's happiness, and despite considerable career demands, Dick was always there with Ruth as they worked through some challenging heath related issues. He was also a great dad, and he was active in the Upper Arlington Baseball and Football Youth athletic programs. I will always remember him coming straight from the office in his blue suit to coach our various football and baseball endeavors. As a grandfather, he helped his grandchildren obtain a high-quality education through his generous financial support. More importantly, throughout his life he epitomized integrity and generosity, and this had a profound positive impact on his family, grandchildren, and many friends in the Columbus area. He never wanted credit, he never wanted attention, but when he saw problems and issues in his family or community, he simply worked hard and gave of himself to take care of the issue and provide opportunities to others. Dick will be sorely missed by his family and friends, but his attributes of native intelligence, a strong work ethic, integrity and a humble giving spirit will live on in the lives of all he has touched. In lieu of flowers, the family would appreciate a contribution to the Columbus Ohio chapter of the Salvation Army. Family has entrusted SCHOEDINGER NORTHWEST with private arrangements.

The family of Richard Rizer Murphey Jr. created this Life Tributes page to make it easy to share your memories.

Send flowers to the Murphey family.