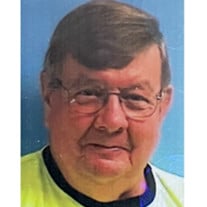 Richard A. Irwin, Sr., 67, passed away on November 2, 2021. He was born in Pittsburgh, Pennsylvania, on September 7, 1954 to Richard C. and Helen (Stocklas) Irwin. Richard attended Thiel College, after which he went into the workforce. He started his 43 year city career at the Recreation and Parks Department as a Storekeeper and also drove the senior citizens bus as needed. Then he moved over to the Department of Public Utilities, Division of Water where his recent title was Engineering Associate II. He was instrumental in creating the Leak Detection Program and spearheading the Temporary Water-Line Program for special events around the city. In his free time, Richard could be found in Black and Gold, rooting for his Pittsburgh Steelers, Penquins, and Pirates every weekend as well as the Columbus Crew. He was also a major Penn State Nittany Lions fan. If Richard wasn't watching sports, he was enjoying NASCAR, or taking some quiet time to go fishing. Richard is preceded in passing by his parents. Left to cherish his memory are his dearly loved wife of nearly 43 years, Toni L. (Lyons) Irwin; his son, Richard "Andrew" Irwin, Jr.; sister Lisa L. Irwin; and Angela Marie Irwin, his beloved furry companion, affectionately referred to as "A.M.I." Richard's family will welcome guests at SCHOEDINGER NORTHEAST, 1051 East Johnstown Road, Gahanna, OH 43230 from 4pm-7pm on Thursday, November 11. His funeral service will take place the following afternoon at Schoedinger Northeast, beginning at 12pm. Richard's funeral service will be webcast live for those not in attendance, and can be viewed on his Tribute Wall shortly before his service begins. The funeral procession following service will be passing by his longtime place of employment, 910 Dublin Road, Columbus 43215, before arriving at Union Cemetery for interment.

Richard A. Irwin, Sr., 67, passed away on November 2, 2021. He was born in Pittsburgh, Pennsylvania, on September 7, 1954 to Richard C. and Helen (Stocklas) Irwin. Richard attended Thiel College, after which he went into the workforce. He started... View Obituary & Service Information

The family of Richard A Irwin Sr. created this Life Tributes page to make it easy to share your memories.

Send flowers to the Irwin family.