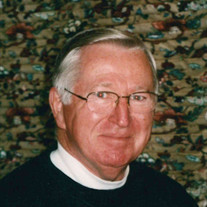 RICHARD L. BRANUM was born on July 18, 1936 and died of complications in Dublin Methodist Hospital after a 30-year-long battle with Parkinson's Disease. He was preceded in death by his parents, Leslie and Amelia Kamas Branum, as well as his son Brian. Survivors include wife Jane, children Debra Bond (Zee), Todd, Jill Markey (Neil); daughter-in-law Anne Scannell (George); 9 grandchildren; and 4 great-grandchildren. He is also survived by a sister, Carol Leighton (Dave), sister-in-law JoAnn Monak, brother-in-law Jim Minoff (Judy); 8 nieces and 1 nephew; Pastor John and Sharon Morris and so many dear friends. Dick graduated from Port Clinton High School and attended Tiffin University. In 1956 Dick went to work for U.S. Steel and Wire in Cleveland as a sales accounting trainee in computer systems. He was sent to IBM programming school, which he considered dumb luck, as it turned into a fortunate career move. Richman Brothers, a men's clothing manufacturer, hired Dick in 1958 as an assistant supervisor responsible for inventory control systems. His last promotion at Richman Brothers was as VP of Systems. Woolworth acquired Richman Brothers in 1972. Dick transferred to Milwaukee to modernize their national accounting facility. He became the Director of Management Information Systems. In 1977 Dick was promoted to Woolworth's home office in New York City as Director of MIS, installing IBM's largest systems order. Two years later, he was appointed the youngest corporate VP in Woolworth history, responsible for data centers in Europe, Canada, Mexico, and the USA. While at Woolworth, he gained a reputation of being first to apply new technology, notably in the area of point-of-sale but also including laser printing and mass storage. In 1983 Dick was recruited by The Limited Corporation in Columbus, OH-back to the Buckeye State! Three years later he became SVP of MIS and assumed responsibility of implementing and operating the Limited Distribution Center. In 1988 he was awarded the prestigious Harry Wexner Award for his "outstanding effort" and "contributions to the business" and was promoted to Executive VP. Dick retired from The Limited in 1993 and consulted for a few years. That same year he was diagnosed with Parkinson's. Even so, he was able to enjoy golf, traveling, being home, and spending time with family and friends, especially the beautiful grandchildren and great-grandchildren. Dick was always active in the church. He worshipped at Prince of Peace Lutheran in Dublin, OH, where he and his wife Jane were charter members. She was the light of his life. They had known each other from childhood, became high school sweethearts, and celebrated 65 years of marriage. Throughout his life, Dick had a positive attitude. He was known for working hard, always being ready to tell a story or a joke, and entertaining family and friends at home with glasses raised to "Let the party begin." Visitation will be held at Prince of Peace Lutheran Church in Dublin, OH on Nov 26 from 2:00-4:00 pm and 6:00-8:00 pm, with a memorial service on November 27 at 11:00 am. In lieu of flowers, donations can be made to honor Richard to Prince of Peace Lutheran Church, 5475 Brand Rd, Dublin, OH 43017.

RICHARD L. BRANUM was born on July 18, 1936 and died of complications in Dublin Methodist Hospital after a 30-year-long battle with Parkinson's Disease. He was preceded in death by his parents, Leslie and Amelia Kamas Branum, as well as his... View Obituary & Service Information

The family of Richard L. Branum created this Life Tributes page to make it easy to share your memories.