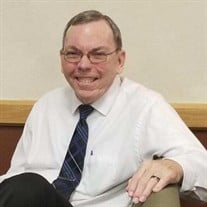 Rhys Riley, age 71, passed away Monday, December 7, 2020. He was born on February 10, 1949 in Shelby, Ohio to the late Lloyd Jr. and Eldora (Rees) Riley. Rhys predominately grew up in Upper Arlington, Ohio and graduated from Upper Arlington High School. He went on to earn a BA degree in business from Ohio University. He began his career in the banking field, before settling on becoming a Real-estate Appraiser. Rhys also enjoyed being a football official at the high school and college levels for almost 25 years. Rhys was a faithful servant of Jehovah God and was baptized as one of Jehovah's Witnesses on May 15, 1977. In addition to his parents, Rhys was preceded in death by his in-laws Melvin Sr and Margaret Conley, and his brother-in-law Melvin Conley Jr. He will be greatly missed by his loving and devoted wife of 45 years, Carolyn (Conley) Riley; their children, Michael Rhys (Jody) Riley, Nathan Riley, and Cara Lynn (Trevor) Lechleiter. He was Grandfather to Alexis Leora McNeal, Joseph Rhys and Amber Renee Riley. Brother to Lloyd Riley III. Brother-in-law to Dick (Joy) Conley. Rhys is also survived by an aunt and uncle, in addition to several nieces and nephews, as well as cousins. Rhys had several close friends within his congregation as well as several childhood lifelong friends. Family will receive friends from 4-7 PM on Monday, December 21, 2020 at SCHOEDINGER NORTHWEST CHAPEL, 1740 Zollinger Road, Upper Arlington, Ohio 43221. Guests are respectfully asked to wear masks and attendance will be monitored to ensure safety for everyone attending. A private service will be held for his family. To view a webcast of the private service, please visit Rhys's tribute wall and click on the webcast link, which will be available on Tuesday, December 22 starting at 11 AM. In lieu of flowers, contributions may be made to the Jehovah's Witnesses Worldwide Work by going to www.donate.JW.org

The family of Rhys Riley created this Life Tributes page to make it easy to share your memories.

Send flowers to the Riley family.