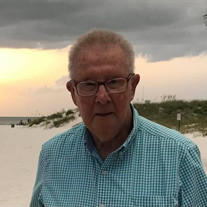 Ray G. Crane Jr., age 95, went to be with his Lord and Savior on August 30, 2021. He was born November 10, 1925 in Detroit, MI, to the late Ray G. Crane Sr. and Lois E. (Barnette) Crane. Ray was predeceased by his loving wife of nearly 50 years, Clara E. Crane, his long time companion, after the passing of his wife Clara, Barbara Rinehart, Mother in law Adrien Turner, brothers and sisters in law Norman Coe, Edna Coe, William Elder, Christine Elder, nieces Linda Coe and Karen (Elder) Moree and daughter in law Ann Crane. Ray is survived by daughter Sharon Crane, son Douglas Crane, grandsons Alexander and Evan Crane, nieces, great nieces, great nephews and one great great niece. He was a long time member of the current Gender Road Christian Church (formerly Southeast Christian Church), Columbus, OH and recently a member of St. Mark's Presbyterian Church, Hudson, FL, also a member of Aladdin Shrine Columbus, OH, Freemason, Mansfield Lodge #35, and Kiwanis, Berwick Manor. He, his wife Clara, and later his companion Barbara, all enjoyed square dancing. He and Barbara often went camping with a group called the Square Wheels. After graduating from Mt. Vernon H.S. in 1943, he attended one semester at Michigan State University before registering for the WWII draft. He began his active duty service with the Navy in April, 1944. Ray ultimately served for about 2.5 years, remaining stateside and serving the majority of his time at Oak Knoll Naval Hospital in Oakland, CA, as a dressing corpsman and dental corpsman. His time as a dental corpsman prompted him to consider dentistry as a profession. However, he found he was better suited to teach and he earned his Bachelors and Masters degrees from The Ohio State University. He began his 33 year teaching career in 1951, spending the majority of his teaching years in the Columbus Public School system where he primarily taught history. Upon retiring from teaching, he and Clara moved briefly to Ft. Myers, FL. After returning to Ohio he never stopped talking about moving back to Florida, which he and his daughter Sharon did in April, 2019. Ray was an avid euchre player and after moving to Florida, a group of euchre players was found and he was able to play 3 days a week. He had a passion for Ohio and US history, which he demonstrated with his substantial collection of Presidential campaign buttons. He and his collection were profiled in a story in the Columbus Dispatch. He also became a member of APIC (American Political Items Collectors) and attended many area shows to add to his collection. There will be a graveside service at Glen Rest Memorial Estates, 8029 E. Main St., Reynoldsburg, OH, on Saturday, September 18, at 11:30. Following the service, please join the family at MCL Cafeteria, 5240 E. Main St., Whitehall, OH for a remembrance lunch. In lieu of flowers, please consider a donation to the Ohio History Connection (formerly the Ohio Historical Society) at www.ohiohistory.org/give . This organization preserves and restores historical memorabilia, including the 36 star American Flag that is on display at the Ohio Statehouse. This flag is the same one that flew at half mast on one of the hotel grounds around Capital Square when President Lincoln lay in state in the Ohio Statehouse rotunda on April 29, 1865. Arrangements entrusted to Schoedinger East.

The family of Ray G. Crane Jr. created this Life Tributes page to make it easy to share your memories.

Send flowers to the Crane family.