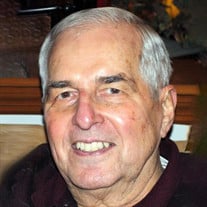 Ralph Hungler, loving husband, father, grandfather, and great grandfather, passed away Monday, July 19, 2021 after battling liver cancer and other health issues. Our Superman to the end, Ralph kept up the good fight, while maintaining his positive attitude and sense of humor. He died with his loving family surrounding him. Born in Cincinnati, Ohio, Ralph attended Roger Bacon High School and received a BS in Accounting from the University of Cincinnati. Meeting his true love on a blind date in college, he married his wife of 61 years, Ruth Ann (Lambert) Hungler in 1960. Ralph worked for Deloitte, Haskins, and Sells as a CPA in their early years of marriage. In Cincinnati, they welcomed three of their four children to their family; Craig (Kathy) Hungler, Steve (Christine) Hungler, and Mindy (Scott) Bailey. The family moved to Columbus in 1970, where they welcomed their fourth child, Jenny (Tom) Woodford. Ralph and Ruth Ann called Columbus, and later Dublin, their home since 1970. Ralph joined Dollar Savings, and then Doctor's Hospital as their vice president of finance. While working, Ralph served on numerous accounting boards and associations in Columbus, and he volunteered many hours with Junior Achievement, North Columbus Sports (NCS), Friends of Upper Arlington Library, AARP Tax Preparation, and Riverside Methodist Hospital. He also served as treasurer of Montessori Children's House, the school his wife helped to co-found, since its inception in 1977. Active members of St. Andrew Parish for 30 years, they later joined St. Brigid after moving to Dublin in early 2000. They were active members of the St. Brigid 55 Plus Club. The many friends they made along their life journey have brought years of good memories and happiness. Ralph was an avid sports fan, watching countless Ohio State football games, golf tournaments, basketball games, or any other game that happened to be on television. His lifelong love of the Reds and the Bengals, as challenging as that has been through the years, was unwavering! Ralph spent his life committed to his family and friends. He enjoyed yearly family trips to Hilton Head Island, where his golf game caused him great stress, an occasional run from an alligator, and many laughs with his family! His favorite moments were those spent with his loud, gregarious, and self-proclaimed comedic family members. His laugh was often the loudest when in the middle of family events! His true love in life was his wife, Ruth Ann, and he was happiest when with her. His love for her was obvious to all, and even in his final day, he said he wanted her to sit by him because she was "the most beautiful woman in the world." Ralph was an inspiration to all, as he taught his family the importance of integrity, hard work, and commitment. He instilled an amazing work ethic in his children, while teaching that as long as we tried our best, that's all that anyone can ask. He demonstrated the importance of putting family first, being there for your friends, and to keep in mind our ultimate goal is to join our Lord in Heaven. His legacy will continue to live on with his family, and we are confident he is now in Heaven. We know he was greeted by his mother, Mary Ann, father Ralph, brother Ron, niece Jill Marie, as well as countless other friends and family members. We love you, Ralph, and we know you will continue to watch over us all until we meet again. You will be forever missed, but your presence will always be in our hearts! In lieu of flowers please consider a donation to Montessori Children's House, 950 King Avenue, Columbus, Ohio, 43212. IF you would like to leave a video memory of Ralph to share with his family you can do so at https://link.schoedinger.com/3iyrsTS.

Ralph Hungler, loving husband, father, grandfather, and great grandfather, passed away Monday, July 19, 2021 after battling liver cancer and other health issues. Our Superman to the end, Ralph kept up the good fight, while maintaining his positive... View Obituary & Service Information

The family of Ralph B Hungler created this Life Tributes page to make it easy to share your memories.