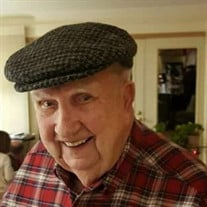 His life was well lived, and he was well loved! The Lord called him home in a peaceful manner at Riverside Hospital, with his family by his side, on Thursday, November 18, 2021 in his 96th year. This gentle, loving, caring and wonderful man has left a permanent mark etched on our hearts and will be supremely missed by his family and friends. Family was the pivotal essence of Franks life. He was proud and honored to be the patriarch, father, grandfather and great-grandfather to his large family. He has been a major presence in the lives of his children, grandchildren and touched the hearts of many he called family and friends. Frank was born on September 7, 1925, in Chatham, Ontario Canada and was the son of the late Leo Fergus and Mary Evelyn Crotty. He was preceded in death by his first wife, Josephine Crotty; son, Tim Crotty; brother, Bob Crotty; and his second wife, Charlotte Crotty. He is survived by his daughter, Christine Barkimer; daughter-in-law, Nina Crotty; grandchildren, Heather Scardina, Mindy (Zach) Decker, Jennifer (John) Chess, Colleen Crotty, Michael (Maria) Crotty; Jason (Allison) Marshall; many cherished great-grandchildren; siblings, Bill Crotty and Joanne Sanders; a host of other nieces, nephews, all loved ones from his second marriage, and numerous close friends he called family. Frank graduated from Oakwood High School in Dayton, Ohio and went on to earn a business degree from the University of Dayton. Frank worked for his family’s business throughout high school and took time off to serve his country in the United States Navy and Marine Corps 4th Marine Division. He became a pharmacist’s mate in the Merchant Marines, earning an American Area Ribbon, Asiatic Pacific Area Ribbon, and World War II Victory Ribbon. Frank was honorably discharged on June 7, 1946 and returned home to his family. Following his service to our country, he returned to work for the family business, and upon the death of his father, formed Van Dyne Crotty Company relocating to Columbus, Ohio. One of Frank’s most proud and accomplished moments was receiving an Architectural and Innovation Award for the company's industrial plant in Columbus, Ohio. As CEO of Van Dyne Crotty Company (now Spirit Services), Frank loved his business and his family. He worked, never wanting to retire, until his early 90’s. Although retired, he never lost his passion for business and would often be found reading a prospectus or research report related to his industry. He spent the remainder of his years spending time with his beloved family who watched over him lovingly. He enjoyed watching westerns, listening to his beautiful music, eating his favorite oatmeal raisin cookies (any cookie really) and telling tales of the good times. Frank was a devoted catholic and member of the St. Andrews Parish in Upper Arlington, Ohio and loved giving back to the Catholic community, churches, and various charities. Visitation for Frank will be on Tuesday, November 30, 2021, 5:00 to 8:00 p.m. at SCHOEDINGER NORTHWEST, 1740 Zollinger Rd. Columbus, Ohio 43221. A Mass of Christian Burial will be celebrated at 10:30 a.m. on Wednesday, December 1st, 2021, at St. Andrews Catholic Church, 1899 McCoy Rd. Columbus, Ohio 43220 with an Interment to follow at Resurrection Cemetery, 9571 High St./Route 23 North Lewis Center, Ohio 43035. Please visit www.schoedinger.com to sign Frank’s online guestbook or to share a special memory. Donations in Frank's memory may be made to Boys Town: PO Box 8000 Boys Town, NE 68010 or by visiting www.boystown.org

His life was well lived, and he was well loved! The Lord called him home in a peaceful manner at Riverside Hospital, with his family by his side, on Thursday, November 18, 2021 in his 96th year. This gentle, loving, caring and wonderful man... View Obituary & Service Information

The family of Frank Crotty created this Life Tributes page to make it easy to share your memories.

Send flowers to the Crotty family.