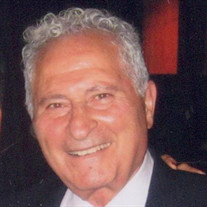 Philip Elias Absi, age 91, was called home to the waiting arms of our Lord and savior on Monday, January 18, 2021. Born in Damascus, Syria on December 27, 1929, the loving son of Elias and Mary (Salooma) Absi. Philip is predeceased by his brother... View Obituary & Service Information

The family of Philip Absi created this Life Tributes page to make it easy to share your memories.