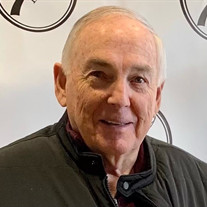 Peter T. Gildea, 81, of Dublin passed away peacefully on Monday, December 20, 2021 at Riverside Methodist Hospital in Columbus, OH. Pete was born on September 30, 1940 in Chelsea, MA to the late James and Eleanor (Riley) Gildea. He received his Bachelor's Degree from Northeastern University, where he played hockey and was enlisted in the ROTC program. Following college graduation, Pete served in the Army as a Signal Supply Officer with a rank of 1st Lieutenant. During the Vietnam War, he was stationed in Okinawa. He was honorably discharged in December 1966. On May 1, 1965, Pete married Carole Manzo, and they shared 40 years of marriage before Carole's death in 2005. Pete started his professional career with Ford Motor Company. He then worked for Arthur Andersen for the remainder of his career. He retired in 2000. Above all else, Pete loved his daughters and his grandchildren. He was always supporting and encouraging his grandchildren in everything they did. His other passion was golf, and enjoying breakfast afterwards with friends. Pete was preceded in death by his parents; his twin brother, James Gildea; his sister, Kathleen Graetz; and his wife, Carole. He is survived by his children, Christine (Jeff) Rees of Westerville, Terri (Gary) Swierz of London, and Lisa Muller of Marysville; and his grandchildren, Alex Rentz, Abby Swierz, Donovan Muller, Zachary Swierz, Riley Muller, Collin Rees, and Gianna Rees. Arrangements entrusted to SCHOEDINGER DUBLIN where a visitation will be held on Sunday, December 26 from 1-4pm, starting with a prayer service at 12:30pm. A Mass of Christian Burial will be held at St. Brigid of Kildare in Dublin on Monday, December 27 at 11am followed by interment at Resurrection Cemetery. To watch the mass online, please visit under 'Menu' and 'Watch Live'. Memorial donations can be made to the following charities that were meaningful to Pete and the family he loved: Susan G. Komen Foundation, Ehlers-Danlos Syndrome Research Foundation, Project Alive, or Autism Speaks.

Peter T. Gildea, 81, of Dublin passed away peacefully on Monday, December 20, 2021 at Riverside Methodist Hospital in Columbus, OH. Pete was born on September 30, 1940 in Chelsea, MA to the late James and Eleanor (Riley) Gildea. He received... View Obituary & Service Information

The family of Peter T. Gildea created this Life Tributes page to make it easy to share your memories.

Peter T. Gildea, 81, of Dublin passed away peacefully on Monday,...

Send flowers to the Gildea family.