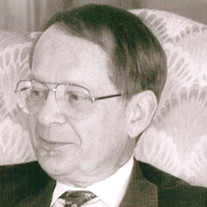 Peter F. Frenzer, 86, of Columbus, passed away on July 22, 2021. He was born on August 19, 1934, to the late William and Ruth (Berliner) Frenzer. In addition to his parents, he was preceded in death by his sisters, Susan Frenzer and Janet Arkfeld. Pete was devoted to his family, to his beautiful wife and to raising children and grandchildren. Even neighbor children would gravitate to him as he worked in his yard knowing he would answer their questions and converse patiently. He was an avid lover of nature, birding and many family pets he cared for throughout his lifetime. He passed on his love of nature, animals and children to his own children and grandchildren. He enjoyed tennis with a long-standing group of fellow tennis buddies. He was a fan of fine wines, was a great cook and read, mostly mysteries, every night after dinner or watched his favorite mystery series on TV. He loved music, the symphony and opera as much as watching OSU football and basketball and of course his grandchildren's sporting events. He was a world traveler and a remarkable storyteller and orator. He was highly regarded in his professional life for his competency and integrity and admired for his respectful work style. His career in the insurance industry included Mutual of Omaha in Omaha, Nebraska and Nationwide Insurance Company in Columbus, Ohio. He was an esteemed colleague of many and highly respected in the investment field. He was an outstanding student and scholar and was educated at Creighton Preparatory School and Creighton University in Omaha Nebraska and at William Mitchell Hamline College of Law in St. Paul, Minnesota. He also received honorary doctorates from other universities. He made education a priority and a possibility for his children and grandchildren. His authenticity and genuine kindness will be remembered and will have a lasting impact on both people who have known him well and also on complete strangers. His sense of humor and love of puns are already missed. He has been his grandchildren's greatest cheerleader and made each one of them feel loved and special so; he excelled as both parent and grandparent. He lived his faith and earned his angel wings fair and square. He lived life thoughtfully and courageously and guided many who came to him for sound advice. His example will continue to serve as a model for many. Pete will be greatly missed by his loving wife, Mary Virginia Frenzer; children, Peter Frenzer, Michelle (Dana Smithberger) Frenzer Cornell, Christopher Frenzer, Jennifer Frenzer, and Paula (Rick) Clay; grandchildren, Benjamin and Olivia Knowlton, R. Ryan, Nick, and Adam Clay; brothers, William and David Frenzer; and numerous nieces, nephews, and close friends. A funeral celebrating Pete's life will be held on Friday, July 30, 2021 at 11am, at St. Joan of Arc Catholic Church, 10700 Liberty Rd., Powell OH, 43065. A visitation will be held on Thursday, July 29, from 5PM until 7PM at the Schoedinger Worthington Funeral Home, 6699 North High St., Worthington OH, 43085. In lieu of flowers, donations in Pete's memory may be made to The Ohio Chapter of the National Alliance for the Mentally Ill; The Humane Society or your favorite pet adoption group; The James Cancer Center and Solove Research Institute.

Peter F. Frenzer, 86, of Columbus, passed away on July 22, 2021. He was born on August 19, 1934, to the late William and Ruth (Berliner) Frenzer. In addition to his parents, he was preceded in death by his sisters, Susan Frenzer and Janet Arkfeld.... View Obituary & Service Information

The family of Peter Frenzer created this Life Tributes page to make it easy to share your memories.

Send flowers to the Frenzer family.