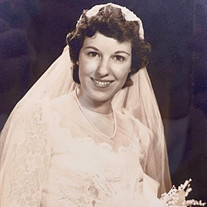 Pauline Marie (Ross) Carberry passed away peacefully on October 6, 2021 at Wesley Woods New Albany. She is survived by her two daughters, Kathleen Carberry (Jason) Skestos, Valerie (Richard Wright) Carberry; four grandchildren, Julius Skestos, Diana Skestos, Emerson Wright and Adler Wright; her brother, Richard Ross; two nephews and one niece. Her husband of sixty years, Raymond Carberry, died in 2017. Pauline was born on February 2, 1933 in Conneaut, Ohio to Theresa Santa Rosa Ross and Nickolas Ross. Pauline defined her life by her devotion to family, commitment to education and a deep appreciation for the natural world. Pauline graduated from Conneaut High School in 1951 as Class Valedictorian. She earned her B.B.A. in Accounting from Kent State Univ., her M.B.A. in Management Science from Kent State Univ. and her Ph.D. in Accounting from Ohio State University in 1970, being only the second woman in the university's history to earn a doctorate in that field. Her career as an educator spanned three decades, teaching in the Business Division at Columbus State Community College. When she was not teaching, Pauline was a passionate vegetable gardener and an early adopter of organic methods. She was well known to family and friends for her love of growing tomatoes and was a skilled cook and baker, celebrated for her lattice crust sour cherry pie. Other creative pursuits included sewing, crocheting and developing her own black and white photographs, which she accomplished in a home darkroom. Pauline and Raymond raised dairy goats together, loved the company of their cats and dogs, and after retirement, enjoyed keeping many varieties of chickens in their backyard. Pauline played the piano and was especially fond of ragtime music; in college she played the oboe in the Kent State marching band. Her ongoing love of marching bands and college football meant that autumn Saturdays were spent watching her favorite team, the Ohio State Buckeyes, with the highlight always being the performance of "script Ohio." Visitation hours will be held on Friday, October 15, from 3 - 5 pm at Schoedinger Funeral Home in Worthington, 6699 N. High Street. The Carberry Family requests that those wishing to make contributions in Pauline Carberry's memory do so to the Franklin County Extension Support Fund (308911) at The Ohio State University Foundation, PO Box 710811, Columbus, OH 43271 or give online at give.osu.edu and search 308911.

The family of Pauline Carberry created this Life Tributes page to make it easy to share your memories.

Send flowers to the Carberry family.