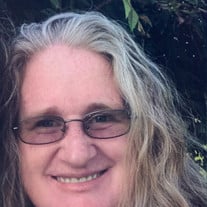 Paula was born on April 2, 1966, just missing her Dad’s birthday and already showing her independence. Her parents Paul and Jan Coleman, deciding she would be the last, named her Paula after her dad. Paula came home to two sisters where she was raised in a loving home. In 1984, she graduated from Brookhaven High School. She earned her cosmetology license from Fort Hayes Career Center and went on to work at Big Bear, Schottenstein’s, Airborne, and Marzetti. The greatest milestone of her life was Sandra, who arrived in August 1985. She was the love of her life and she brought her much joy. In 2014, Paula’s name changed forever to MawPigs when her granddaughter Mariana was born. She loved being a grandma and spent many hours with Mariana taking her to Universal Studio’s, the Library and many of their favorite places. She called Mariana her sweet watermelon pineapple baben’s. in 2018, her name was changed again to mother-in-law gaining another daughter, Kaitlin. It then became the 4 musketeers instead of 3. In 2006, Paula was baptized and became a member of the Columbus Primitive Baptist Church. She had a lifelong love for Jesus, horses, motorcycles, and all things pigs! This is where she picked up the nickname Piggi Paulie. Paula loved animals and had 2 fur-babies, Brownie and Jax. Paula also loved music (Tom Petty being one of her favorites) playing cards, movies, bowling, and attending family reunions- you could always find her with a Pepsi in her hand. In 2003, she followed her lifelong dream of moving to Florida. While in Florida she had the opportunity to achieve things she thought she never would, like traveling cross-country visiting many states and completing her real estate license. Paula was many things in her life – she was a mom, a wife, a Christian, a grandma, a mother-in-law, and she was a best friend. Paula will be missed by all those that loved her. God just could not go without her and called her home to be with him on July 12, 2021. Paula’s family will receive friends from 4-6 p.m. on Wednesday, July 21, 2021, at SCHOEDINGER NORTHEAST, where funeral services are to begin at 6 p.m.

Paula was born on April 2, 1966, just missing her Dad&#8217;s birthday and already showing her independence. Her parents Paul and Jan Coleman, deciding she would be the last, named her Paula after her dad. Paula came home to two sisters where... View Obituary & Service Information

The family of Paula Coleman created this Life Tributes page to make it easy to share your memories.

Send flowers to the Coleman family.