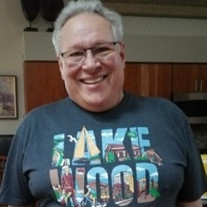 Paul Brian Sonderman passed away peacefully from pancreatic cancer on July 3, 2021 at the age of 68 in Columbus, Ohio, in the presence of family. He was known for his compassion, creativity, and wonderful sense of humor, though admittedly this list of three descriptors hardly seems adequate for a man of his quality and vocabulary. While he was certainly a countless number of wonderful things, Paul was truly one of a kind. He was born October 21,1952 in Findlay, Ohio to Joe and Wilma Withers Sonderman. As a child, he possessed a musical spark that he carried throughout his life. While earning a degree from the University of Northern Iowa, he was the frontman for several rock and roll bands and relished the chance to sing or play harmonica for a crowd. He met the love of his life Susan and their 40 year marriage was one of devotion and humor. He would do anything for his "Suzie-Q." Susan would often remark that not a day would go by when Paul didn't make her laugh. Paul was a devoted and doting father to his sons, Ben and Steve. He was constantly inventing games for his children and their friends, often at the expense of his own physical health. He revelled in his sons' accomplishments, no matter how small. He supported them at every turn, and was so proud to watch his boys grow into young men. While he worked as a writer, director, and producer for American Electric Power and Ross Laboratories, he refused to be defined by his career. Paul's work allowed him to pursue his altruistic passions, helping those who are underserved or less fortunate. He served as a Big Brother for the Big Brother Big Sisters organization and volunteered countless hours in food pantries through St. Vincent de Paul. He felt a profound responsibility to offer what he could in the service of others, relishing the chance to jump in his van and gather donations from bakeries or make a huge batch of his famous chili for the local food pantry. Paul is survived by his wife Susan, his children Ben (Chrissy), and Steven (Katie), siblings Joe (Lynn) Sonderman, Andrew Sonderman, Cindy (Jim) Hoffmann, Shelly (Lance) Johnson, Nathan (Ronald Hobock) Sonderman, and many nieces and nephews. He was preceded in death by his parents, Joe and Wilma Sonderman, sister in law, Micheal Sue Sonderman, and brother, Donald Sonderman. Friends may call on Friday, July 16 from 4-6 p.m. at Schoedinger Worthington Chapel, 6699 N High Street, Worthington Ohio, 43085 A Mass of Christian Burial will be held on Saturday, July 17th at 9:00 a.m. at St. Anthony Church, 1300 Urban Drive, Columbus Ohio, 43229 In lieu of flowers, memorial gifts are requested in Paul's memory to: St. Vincent de Paul Society ℅ St. Anthony Church 1300 Urban Drive Columbus Ohio, 43229

Paul Brian Sonderman passed away peacefully from pancreatic cancer on July 3, 2021 at the age of 68 in Columbus, Ohio, in the presence of family. He was known for his compassion, creativity, and wonderful sense of humor, though admittedly... View Obituary & Service Information

The family of Paul B. Sonderman created this Life Tributes page to make it easy to share your memories.

Send flowers to the Sonderman family.