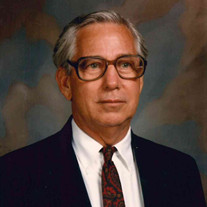 Paul Craig Smith, age 91, passed away Friday, July 30, 2021. He was born on March 18, 1930 to the late Chester A. and Elizabeth L. Smith. Preceded in death by his parents, his sister Elizabeth Smith Stein, in-laws Ray D. and Ruth E. Miller. Survived by wife of 69 years Sarah (Miller); daughters Leslie Smith and Stephanie Smith Johnston (Jeff); four grandchildren, Anne Schumacher Shukwit (Adam), Elizabeth Schumacher, Christine Johnston Nidiffer (Marcus) and Thomas Johnston; two great-grandchildren Oliver and Piper Shukwit; niece Libby Stein Klein (Dennis); nephew David Stein; and several great-nieces and nephews. Paul was a graduate of Upper Arlington High School Class of 1948. He graduated from The Ohio State University School of Architecture in 1954 and then served as a Lieutenant in the Air Force at Craig Air Force Base in Selma, Alabama. Paul was the past President and CEO of Chester A. Smith, Inc. Marble and Granite, founded by his father in 1928. It was through Paul's guidance, knowledge of stone, and creativity that the company received honors and awards for design, fabrication, and installation in the Columbus area and far beyond. An installation that he was particularly proud of is the map on the floor of the Ohio Statehouse depicting the 88 counties of Ohio using various types of inlaid marble and granite. The business remains in the capable hands of his son-in-law, Jeff Johnston. Paul was Vice President and past member of the Board of Directors of the Marble Institute of America. He was a 32nd Degree Mason, a member of Sigma Alpha Epsilon Fraternity, The American Institute of Architects, The Ohio State University Presidents Club, Buckeye Club, Columbus Museum of Art, and Scioto Country Club. Family will receive friends from 5:30-7:30 PM on Wednesday, August 4, 2021 at SCHOEDINGER NORTHWEST, 1740 Zollinger Road, Upper Arlington, Ohio 43221. A private service will be held for the family. In lieu of flowers, please donate in his memory to the charity of your choice.

The family of Paul Craig Smith created this Life Tributes page to make it easy to share your memories.