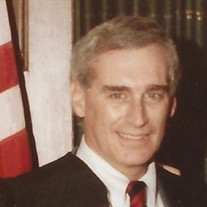 Pat McGrath, age 78, of Dublin, Ohio and formerly of Grand Blanc, Michigan, passed away on Thursday December 17, 2020. Pat grew up in rural Michigan where he excelled in athletics, playing football, baseball and basketball. He graduated from Grand Blanc High School in 1960. He went on to graduate from the Ohio State University in 1964 with a B.S. in Political Science, followed by a law degree in 1968. After a short time doing personal injury litigation in private practice, Pat joined the Columbus City Attorney's Office, where he rose to the position of Chief Counsel. In 1988, he was elected Franklin County Common Pleas Judge and served that court for 16 years, including multiple terms as Administrative Judge and Presiding Judge. In 2004, Pat was elected to the Tenth District Franklin County Court of Appeals, where he served until 2011. He subsequently served as visiting judge in courts around Ohio, including the Ohio Supreme Court, and was currently Judge on the Ohio Court of Claims. He was proud of his professional reputation for integrity and fairness, and the fact his many supporters crossed political lines. Pat was involved in many organizations, most notably Creative Living, Phi Delta Theta and Charity Newsies. Pat especially loved golfing (at Brookside C.C. and Hilton Head Island) and sailing (on Lake Erie and elsewhere). He also loved all sports, music, singing, traveling and the outdoors. He was an avid reader, especially of historically-base novels, and a great story-teller with an infectious sense of humor. Preceded in death by his parents Paul and Eunice ("Sally") McGrath. He is survived by his wife of 30 years, Barbara; daughter Caitlin Rose; sister Margaret Hiss of Ann Arbor, MI; brother Paul ("Mick") of Newport Beach CA; father-in-law Jack Gates; mother-in-law Lois Gates; sister-in-laws Rebecca Lilley, Carolyn Buhler, Susan Teschner and Jacquelyn Harrington; brother-in-law James Gates; many other family members, and a host of friends, both socially and professionally. Due to health concerns, a private service will be held. A public celebration of Pat's life will be held during safer times. Contributions may be made to Charity Newsies, 4300 Indianola Ave., Columbus, OH 43214. Arrangements entrusted to SCHOEDINGER NORTHWEST.

Pat McGrath, age 78, of Dublin, Ohio and formerly of Grand Blanc, Michigan, passed away on Thursday December 17, 2020. Pat grew up in rural Michigan where he excelled in athletics, playing football, baseball and basketball. He graduated from... View Obituary & Service Information

The family of Patrick McGrath created this Life Tributes page to make it easy to share your memories.

Send flowers to the McGrath family.