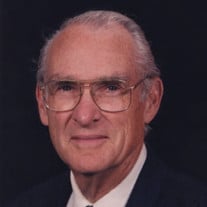 Patrick W. Doyle passed away peacefully in his sleep in Columbus, Ohio on June 4, 2021. He was born June 23, 1924 to Ida Mae Fritz and Thomas W. Doyle and was 96 years old when he left us. He was born in Flint, Michigan and moved to Toledo, Ohio when he was in the eighth grade. He spent his teen years at Rosary High School and graduated in 1942. He enrolled at The Ohio State University in the Fall of 1942, joining the Phi Si Fraternity. Shortly after starting his college career Pat enlisted in Navy Pilot Training in December 1942. He completed his ground training in Ohio and flight school at Gonzaga University in Spokane, Washington. He failed the eye exam when he got to Oakland, California so he completed training as a Gunner and Radio and Radar Operator. He rose to the rank of Petty Officer 3rd Class and finished his career as a Flight Instructor. Never one to dilly dally, Pat returned to OSU in 1946 to start business school and graduated in 1948 after 9 consecutive quarters of study. A fraternity brother from Newark introduced Pat to his first wife Sue Murphy. He was smitten with Sue when he saw her later on at a party and soon asked permission to marry her in June, 1948. He briefly worked for his brother Bob at the Chrysler dealership in Rockford, Illinois before diving into his career as a Stock Broker and Mortgage Banker in Columbus focusing on commercial real estate. He achieved a great deal during his career and rose to be Vice President of the Ohio Mortgage Bank. He remarried to Carol Davis in 1975 and welcomed her 4 beautiful daughters to the Doyle Clan. Pat loved spending his childhood summers at the cottage on Lake Fenton in Michigan where he would swim, fish and enjoy recreation on the water. He was a good student and played football, basketball and ran track. He swam like a fish and inspired a love of water in his children and grandchildren. He enjoyed hunting trips in Texas with his brother Dick Doyle. During his golden years he loved to spend time on the golf course and tennis court and would often escape Ohio for the Winter and head down to Florida for some sun. Pat is survived by his children William Doyle, Patrick Doyle, Elizabeth (Betty) Layton and many grandchildren. He was preceded in death by his son Andrew Doyle. During his stay at First Community Village he reconnected with an old friend from Grandview, Tamea Supthen. They spent happy times together dancing and listening to classical music. Gifts in honor of Pat can be made to Texas School for the Deaf Foundation, Post Office Box 42747, Austin Texas, 78704. The family will have a private celebration of Patrick's life. Act in haste, repent in leisure. Rest in power Patrick.

Patrick W. Doyle passed away peacefully in his sleep in Columbus, Ohio on June 4, 2021. He was born June 23, 1924 to Ida Mae Fritz and Thomas W. Doyle and was 96 years old when he left us. He was born in Flint, Michigan and moved to Toledo,... View Obituary & Service Information

The family of Patrick W. Doyle created this Life Tributes page to make it easy to share your memories.

Patrick W. Doyle passed away peacefully in his sleep in Columbus,...