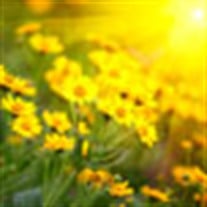 Patty Wetherbee died peacefully on October 8, 2020. She was 91 years old, born on February 9, 1929, to Byron and Gaynelle Redman in Cincinnati, Ohio. Patty was a graduate of Upper Arlington High School (1947). She attended Cornell University and The Ohio State University, graduating from OSU in 1951. She married her high school sweetheart, Milton Richard "Dick" Wetherbee, in 1951. After 65 years of marriage, Dick preceded Patty in death in 2016. Patty missed him every day. She was also preceded in death by her brother, Byron "Pete" Redman, Jr. Patty worked for Lazarus in downtown Columbus for a year as a window dresser, then became a mother. A dedicated mother and homemaker, Patty raised six children in Upper Arlington and then out on Hoover Reservoir in Delaware County. Dick and Patty moved to First Community Village in 2013, and enjoyed renewing old friendships and kindling new ones. Most recently, Patty moved to Grand Rapids, MI, to be closer to family. Patty was an accomplished and passionate artist. She discovered oil painting in the '70s and was an active student at the Columbus Cultural Arts Center, a member of the Worthington Area Art League, and a participant in both juried and personal exhibits around Columbus. She also cherished sessions over the years at the Vermont Studio Center in Johnson, VT. Patty earned a second Bachelor's in 1987 from OSU in Art Education. A child of the Depression who grew up during World War II, as well as the daughter of a beloved civic figure, Patty was an ardent believer in active citizenship, and one's duty to be a member of the larger community. Patty volunteered in the public schools in Delaware and Franklin County, sharing her love for art and reading. She volunteered at the Mid-America Food Pantry, and was a voting poll worker for many years. She urged her daughters and granddaughters to vote, reminding them that it was not too long ago that women didn't have that right. Patty grew up in a founding family of First Community Church. Patty, along with Dick, was a counselor at Camp Akita. Later, she and Dick formed Couple Circle 20 in 1951, which has met regularly since then. Patty was a thinker, a reader, and a believer. Over her lifetime she was also a member at St. John's Episcopal Church (Worthington, Ohio) and St. John's Episcopal Church (Arlington, Vermont). Patty was a member of another source of fellowship, a women's group known as The Sewing Circle who first met as young mothers with their mending and continued to meet until the last year of Patty's life. A Campfire Girl, Patty loved everything outdoors -- birding, camping, gardening, hiking, and sailing -- and instilled that love in her children. Patty and Dick shared many adventurous travels to places such as the Bahamas, Europe, and Alaska. They spent summers at their cabin in the woods near Arlington, VT. Patty will be remembered for her love of family and community, her kind heart and generous spirit, and her love for and creation of beauty. Patty was a mother of six, grandmother of thirteen, and great grandmother of six. She is survived by her children: John (Diana) Wetherbee, Kathy (Jim) Betzhold, Peter Wetherbee (Ruth Rappaport), Susie (Martin) Hall, Betsy (Don) Jackson, Paul Wetherbee (Gretchen Colonius); thirteen grandchildren: Cristen Dutcher, Sara Warner, Heidi Wetherbee, Molly Kusek, Robin Coccagna, Alice Betzhold, Benjamin Wetherbee, Peter Hall, Rebekah Hall, Sam Jackson, Caroline Jackson, Luke Wetherbee, Kirby Wetherbee; and four great grandchildren: Jack Dutcher, Savannah Kusek, Gaynelle Kusek, Eliza Warner, Kaitlyn Warner, and Isabel Warner. Given coronavirus precautions, there will be a private burial service for family only at Green Lawn Cemetery in Columbus, Ohio. Plans for a memorial service in the future will be announced.

The family of Patricia Dell Redman Wetherbee created this Life Tributes page to make it easy to share your memories.

Send flowers to the Wetherbee family.