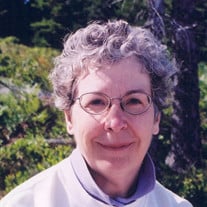 Patricia Wuichet Riechel, mourned for by her deeply devoted husband, Dr. Donald C. Riechel, and her three loving stepdaughters, Jeanne Beaver, Erika Mccleese, and Silvia ldziorek, died on October 21, 2021, age 74, of Alzheimer's disease, as had her dear father, John W. Wuichet, Jr, before her, in 2004. She had been in the excellent professional care of the nurses, aides, and directors of the Forum at Knightsbridge, as well as of Capital City Hospice, to whom all we are deeply grateful. Pat received the B.A. degree from the Ohio State University in 1969, when she was also presented with the Outstanding Senior Woman Award. She completed her studies for the M.A. in Organizational Behavior/ Communication and International Broadcasting (1970). Her distinguished career of service at the Ohio State University had begun in 1969, when she became an Academic Advisor in University College. Her first work in the College of the Arts was as Director, Arts Information and Publication, and then as Project Administrator, Wexner Center for the Arts. Her roles in the College of the Arts culminated in her work as Associate to the Dean, 1985 to retirement in 2010. Our beloved Pat also served on a number of committees within the University, among them the Council on Academic Affairs, the Affirmative Action Council, Human Resources Council (Chairperson, steering Committee), the Association of Faculty and Professional Women, the University Staff Advisory Committee (1989-1992), which group of colleagues bestowed upon her an Award for Outstanding Service. In 1997, she won the Ohio State University Distinguished Staff Award. During those same notable years, Pat Wuichet Riechel, a resident of Upper Arlington, volunteered community service, dating from her graduation from the Columbus Area Leadership Program in 1982, in which she became member of their Board of Trustees and co-chairwoman. She was undoubtedly inspired in such service by the memory of her grandfather, John W. Wuichet, Sr, who had established Upper Arlington's school system and was the first president of its Board of Education from 1918 to 1927. (The Upper Arlington Historical Society installed a plaque in his honor on the Society's Wall of Honor, outside the Upper Arlington Municipal Services Center, 3600 Tremont Road.) Pat was also vice-president and president of the CALLVAC Services Board of Trustees, a referral service for giving help (the name changed to FIRSTLINK in 1995.) Pat Riechel also was a member of the Thurber House Board of Trustees for eight years, providing leadership for many of the organization's programs and activities. She was named president of the Thurber House Board of Trustees, 1996-1998, and even before that, in 1993, the Rotary Club of Upper Arlington had presented her with their Northwest Woman of the Year Award. The Ohio State University College of the Arts was the ideal intellectual and personal ground for our beloved Patricia Wuichet Riechel, with her compassionate and creative spirit. She was ever devoted to music and the visual arts, and took delight in giving pleasing form, aesthetic meaning, even to things in her world of daily experience. To her, all art enhanced life, just as she herself enriched our world with love, friendship, and a marriage that was, in Shakespeare's words, a "marriage of true minds" (Sonnet 116), a love "Which does not alter when it alteration finds." Family will receive friends from 3:00pm - 6:00pm on Thursday, October 28, 2021 at SCHOEDINGER NORTHWEST, 1740 Zollinger Road, Columbus, Ohio 43221. A private family interment will be held at Woodland Cemetery, 118 Woodland Avenue, Dayton, Ohio 45409. In lieu of flowers memorial contributions may be made to Alzheimer's Association, Central Ohio Chapter, 1379 Dublin Road, Columbus, Ohio 43215. Please visit www.schoedinger.com to share memories and condolences.

The family of Patricia Wuichet Riechel created this Life Tributes page to make it easy to share your memories.

Patricia Wuichet Riechel, mourned for by her deeply devoted husband,...

Send flowers to the Riechel family.