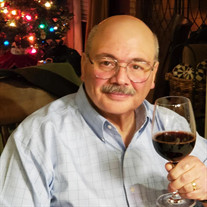 For a few moments this week, the world became a little bit darker. You probably noticed - I did too at 4am Monday, when I turned on the lights in the house....and they just appeared dull. I played with the switches, but nothing made them as bright as they once were. Room by room.....none of the lights had the vibrancy they once held. And then, as I sat in the wee hours of the morning with a cup of tea in hand, reflecting on the tragedy faced just a few hours prior.....it now made complete sense. HE'S GONE. And this world will never be as bright as it once was. On Sunday, January 24, 2021, my best friend, my best man, my confidant, my BROTHER - he touched the face of God. And the Lord reached back, embracing him in pure love and that same light.....and relieved him of the burdens of this world.Now, he is finally reunited with his cherished mother, his beloved father, his sister and his little "sis." And he is HOME. Pasquale J. Sallustio Jr, aka Patsy, aka Rocco, aka Pat.....passed away on Sunday, January 24th at the tender age of 60. A damn fine son. A United States Marine. A keeper of "the sauce" recipe. A bar manager. A devoted husband. A staunch Catholic. A proud "Pop Pop." A friend that gave definition to the very word. And a brother that one could only aspire to be. Rocco was also a barman......but, a MAN of the bar, truly was he. If you've ever been Rocco'ed, you would understand that sentence. Pat (the same guy) broke the code years ago to the secret of the universe. "TWO is better than one." If you ever sat at the table with him, you would understand that as well. Or had the privilege to be invited to "Pat's Place." He poured heavy. Cooked much. Loved large. And he adored life. Patsy was also a "mama's boy," and one that was tough as hell. He could hit hard, and tourniquet a broken heart. His word was final, unless you could make him crack a smile. He was one of the few, the proud, and the kindest of men. Preceded in death by his angelic mother Vienna (LaRocca) Sallustio, his beloved father Patsy Sallustio Sr, his precious sister Theresa Sacchini and his beautiful "little sis" Lynn Romo, Pat leaves behind the one woman he loved more than life itself.....his wife Debora ("my Debbie Kay") Sallustio (McKee). He also leaves his daughter Sarah (Matt) Confer and granddaughters Emily and Anna, the three other women that gave the same light to his world that he gave to all of ours. He leaves a brother that will never be the same without him. A godson Seth, and goddaughter Maria. A gazillion family and friends, and of course, his extended family of Columbus Club members and staff whose lives he enriched for more than two decades, all of whom will remember him for the man he was - which was, simply, THE BEST. Calling hours for our beloved Pasquale will be Thursday, January 28, 2021 from 4-7pm at Snyder Crissman Funeral Home, 119 Bear St in Worthington, PA. Funeral service will be held on Friday, January 29, 2021 at 11am at Franklin Union Baptist Church in Worthington, PA, with interment to follow at Lawn Haven Burial Estates. For his Columbus family and friends, a memorial service will be held at The Columbus Club in March, with a date soon to be announced. As Christmas was his most favorite time of the year, in lieu of flowers, contributions in Pat's memory may be made to Toysfortots.org. "A friend loves at all times, and a brother is born for the difficult times." Proverbs 17.17

For a few moments this week, the world became a little bit darker. You probably noticed - I did too at 4am Monday, when I turned on the lights in the house....and they just appeared dull. I played with the switches, but nothing made them as... View Obituary & Service Information

The family of Pasquale "Rocco" Sallustio created this Life Tributes page to make it easy to share your memories.

For a few moments this week, the world became a little bit darker.
You...

Send flowers to the Sallustio family.