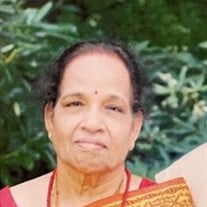 Parvathi K. Subramanian was born on October 24, 1939 in Kolkata, West Bengal, India to S. Krishna Shashtri and Sri. Lakshmi. She lived for 81 years and died shortly after being diagnosed with advanced metastatic cancer. Parvathi was surrounded by her entire family just hours before her death and died peacefully in her sleep on January 5, 2021 at her home in Pickerington, Ohio where she lived with her daughter's family. Parvathi was married on July 10, 1960 to Dr. Balakrishnan Subramanian and was happily married to him for 60 years this past July. They emigrated to the United States in the mid 1960's and settled in Youngstown, Ohio where they resided for 48 years. Parvathi was known to family and friends alike as a vibrant, healthy, intelligent woman. She adapted easily to life in America while remaining true to her cultural and religious heritage as a married Hindu, Brahmin, Indian woman. Parvathi became a U.S. citizen in 1978 and enjoyed helping new Indian immigrants adjust to life in America serving as a surrogate mother by offering emotional support and guidance, and even taught many women to drive a car. She was an excellent cook whose dinner invitations were never declined. Parvathi was active in the Indian community, worked at Kmart Corporation for many years, and completed two years of college at Youngstown State University while raising her three children. Parvathi is survived by her husband, Balakrishnan, 92, younger sister S. Kamala, her children: Arvind (Meena) Subramanian, Mohan Subramanian, Sheila (Terry) Jones, and her seven grandchildren. The private family Hindu funeral service and cremation will be held on Thursday, January 7, 2021 at Schoedinger East in Columbus, Ohio.

Parvathi K. Subramanian was born on October 24, 1939 in Kolkata, West Bengal, India to S. Krishna Shashtri and Sri. Lakshmi. She lived for 81 years and died shortly after being diagnosed with advanced metastatic cancer. Parvathi was surrounded... View Obituary & Service Information

The family of Parvathi Subramanian created this Life Tributes page to make it easy to share your memories.

Send flowers to the Subramanian family.